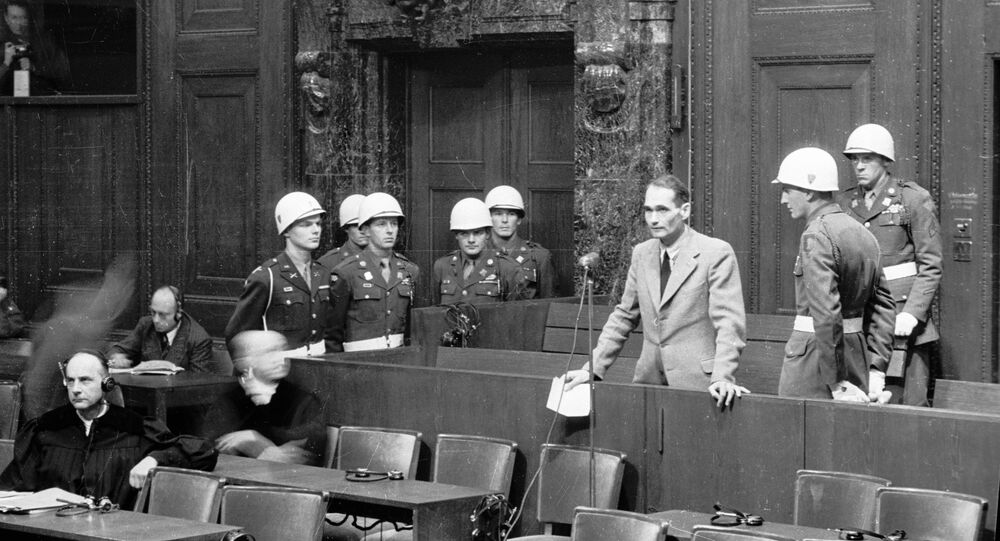 The long awaited release of British government documents on the fate of Nazi No. 2 Rudolf Hess has failed to dispel numerous conspiracy theories about his death in 1987 at Spandau Prison in Berlin. Buried in the 71 files released to the National Archives in London are some intriguing revelations.

By Nikolai Gorshkov — Successive British governments dismissed suggestions by historians that Hitler's deputy Rudolf Hess undertook his daredevil flight to Scotland on a "peace" mission in the thick of the German bombing blitz of Britain because of an "understanding" between the Nazis and a pro-German party within the British establishment. Many a book has been written about Hitler's desire to strike a peace deal with London to free his hands for the invasion of the Soviet Union — or even sign Britain up for a joint crusade against the Communists, hated by both Hitler and Churchill. Indeed, Hess flew to Britain only six weeks before Germany attacked the Soviet Union. The British always denied he told them about Operation Barbarossa but Stalin believed he did and even invited Britain to join in. Churchill, for all his anti-Communism, didn't accept the offer and took Hess prisoner.

At the Nurnberg trial of leading Nazis in 1946 Hess was found guilty of crimes against peace and sentenced to life in prison. Until his death in 1987 he called the verdict perverse, since he had risked his life and limb on a "peace mission." Completely isolated from the world at the Allies' Spandau Prison in West Berlin, Hess secretly made copious notes about his endeavor on rolls of toilet paper and tried to have them smuggled out by a French pastor. The plot was uncovered and the world lost a chance to learn about what had really happened between Hess and the British in May 1941. All the information about the affair was kept secret for decades and released piecemeal under pressure from historians and the public. Even the latest release 30 years after Hess's death has significant gaps. For example, the report by the Royal Military Police on its investigation, and documents about the aftermath of Hess's death have again been retained by the Foreign Office.

Hess doggedly fought for his release throughout the 40 years of imprisonment and the news of his suicide on August 17, 1987, left many suspicious. Was it the British, who as some historians claim, finally got rid of Hess to spare themselves an embarrassment of possible revelations? The jury is still out, according to the newly released documents.

Two days after Hess's death a joint statement by the four powers (Britain, France, the United States and the Soviet Union) jointly running the Spandau Prison said he had committed suicide. Now, a Foreign Office telegram reveals that the statement was written and agreed by only three of the four custodians, who then presented the Soviet side with a fait accompli.

"A press statement on the autopsy was agreed by the three allies this afternoon and subsequently put to the Russians at a [Spandau] Governors' meeting on the basis that it would in any case be released at 18.00 local time."

And the statement was in fact released despite Soviet reservations saying that Hess took his own life and died of asphyxiation.

Much has been said and written about the suicide method used by Hess — an electrical extension cable found on his neck in the summer house on the prison grounds. His son Wolf-Rudiger and lawyer Alfred Seidl claimed Hess could not have tied the knot on the cable because of arthritis — he even had difficulty tying his shoelaces.

The released documents throw up a hilarious explanation:

"The extension cable used had for some time been kept in the summer house, and when not in use (so that a standard lamp could be put in the position Hess likes) it was tied to the window with a knot. There was thus no need for Hess to remove it from anywhere."

How very convenient! Is it not standard prison practice to keep inmates away from anything that they could use to harm themselves? Over 40 years of confinement Hess had made several attempts on his life, and the authorities should have taken precautions commensurate with the risk of another one. A flexible lead extension is an ideal suicide tool and the very fact of it being in the cabin where the prisoner was habitually left alone, albeit only for several minutes at a time, amounts to gross negligence at least, or criminal intent at worst. The knot in the photo of the summer house, released with the papers, is an elaborate boating knot designed to hold a heavy weight. Why on earth should anyone keep an extension lead in such a peculiar fashion — in prison!

© Photo : The National Archives
Photo of the electric extension cable tied to the window of the cabin where Hess was found strangled.

This was an astonishing breach of all prison security procedures, which at Spandau were discussed and reviewed regularly, as exemplified by the released prison governors' minutes. But the breaches did not stop there. The Acting Soviet Governor of Spandau, the papers show, was "perturbed to discover that the SIB [Special Investigation Branch of the British Royal Military Police — NG] had already had access to the Portakabin [the summer house where Hess was found strangled — NG], saying that the Agreement [on managing Spandau — NG] laid down that the Cell Block area be immediately sealed by the US Governor [since the Americans were responsible for guarding Spandau in August — NG]"

The US Chairman Governor argued that he had the authority to allow the SIB in. However, he and the French Governor immediately offered to consult their superiors about SIB access. The British Governor confided in his bosses that

"I did not volunteer the information I had earlier received from Capt Ambrose that someone, presumably the British Warder had in fact already let them into that area and they had been able to…"

Here the released document abruptly ends and the final SIB report into the circumstances of Hess's death remains under wraps to this day. As was the autopsy report, released only now.

Since Spandau was located in the British Sector of Berlin, Britain bore overall responsibility for the physical security of the prison. Yet, it appeared quite lax, as several incidents have shown. On October 23, 1986, an explosion destroyed a prison annex and shortly before Hess's death his flying suit and other personal effects were stolen from the prison. On both occasions investigations came to nothing, which caused the displeasure of the Soviet side. The Soviet governor wanted to put on official record the failure of the British to carry out a proper investigation into the theft but the Western allies only agreed to document this as his personal view. It has transpired from the released documents that at the start of the investigation by the British military government the Western allies had agreed to "ensure that the finger of guilt should not be pointed at any of the Western personnel of the Prison."

There was no attempt to investigate if there was any link between the theft and Hess's death shortly afterwards. No fingerprints were taken from the cabin where Hess died on excuse that too many people had access to it, although clearance was restricted to a known circle of prison staff. When Hess's relatives and lawyer asked to see the scene of his death, the British governor, Tony Le Tissier, told them that the "summer house had been crushed and destroyed." The murder weapon, namely the extension cord, had allegedly perished with the house. This happened according to some reports within 48 hours of Hess's death. What a novel way of conducting an investigation into a suspicious death!

The Western Allies agreed at the time that
"…the autopsy report is not suitable for publication and that it would be preferable to avoid giving it to Wolf-Rudiger Hess [Rudolf's son — Ed.]."

The Western Allies agreed at the time that "the autopsy report is not suitable for publication and that it would be preferable to avoid giving it to Wolf-Rudiger Hess [Rudolf's son — Ed.]."

What was so unsuitable in the report that kept it from the public eye for 30 years? Maybe an unexplained bruise on Hess's head?

© Photo : The National Archives
Summary of the autopsy report.

Again the British custodians of the prison tried to dodge the issue — and sideline their Soviet partners.

"The better course in our view would be a clear and firm statement to the press, agreed at least with the Americans and French, which drew on its conclusions and those of the SIB [Special Investigations Branch of the Royal Military Police — Ed.] The report was designed to put an end to further doubts and speculation."

But that's exactly what this approach has achieved — doubts and speculation regarding the death of Allied Prisoner No. 7.

Over 5,000 Neo-Nazis Descend on Small German Town for Rock Concert