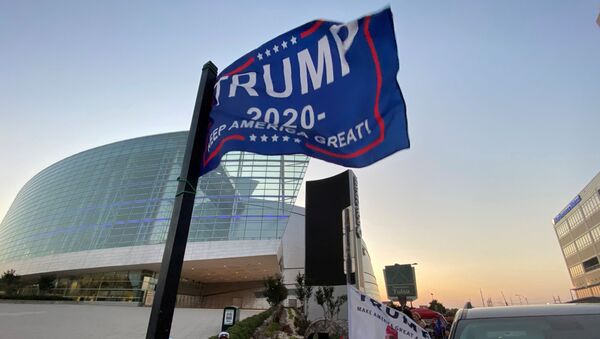 As COVID-19 cases spike in Oklahoma’s Tulsa County, US President Donald Trump’s reelection campaign has promised to give attendees at a Saturday rally temperature checks and to supply them with masks and hand sanitizer. The city has also lifted a downtown curfew put in place during recent anti-racist protests.

Trump’s rally in the eastern Oklahoma city scheduled for Saturday night has aroused no shortage of outrage. Originally scheduled for Friday, June 19, it was moved to the following night after concerns were raised about the conjunction of the date (Juneteenth, which celebrates the end of the enslavement of Black people in the US) and the location (site of the country’s deadliest anti-Black race riot in 1921), especially as unprecedented protests against anti-Black violence are sweeping the nation.

However, now the concern is that bringing together thousands of people in an enclosed space could become fertile ground for the coronavirus to spread. After requesting information from Trump’s campaign about how it intends to minimize the risks of COVID-19 spread, the Bank of Oklahoma (BOK) Center in Tulsa, where the rally is to be held, announced it had received the president’s game plan.

“Among the many other safeguards, all building staff will be tested, temperature-checked and provided with personal protection equipment. The venue will be cleaned and disinfected repeatedly throughout the event, with special emphasis on high touch areas,” the statement continues. “Plexiglass partitions will be placed at all concession locations. Four hundred hand sanitizing stations have been placed throughout the building for attendee and employee use.”

On Tuesday, an Oklahoma judge blocked a temporary injunction by locals who attempted to stop Trump from holding the rally over coronavirus concerns. According to Friday data from the Tulsa Health Department, Tulsa County has confirmed 2,070 cases, more than any other county in the state, and saw its highest seven-day average for daily new cases at 89.6.

Tulsa Health Department Director Bruce Dart urged on Wednesday that “anyone planning to attend a large-scale gathering will face an increased risk of being infected with COVID-19. We want to keep people safe ... If you are part of a vulnerable population, please stay at home."

Never one to keep gasoline away from a fire, Trump took to Twitter on Friday to gloat that Tulsa Mayor G.T. Bynum had raised the curfew imposed on downtown for Friday and Saturday night for rally attendees. Trump also said, “Any protesters, anarchists, agitators, looters or lowlifes who are going to Oklahoma please understand, you will not be treated like you have been in New York, Seattle, or Minneapolis. It will be a much different scene!”

Any protesters, anarchists, agitators, looters or lowlifes who are going to Oklahoma please understand, you will not be treated like you have been in New York, Seattle, or Minneapolis. It will be a much different scene!

​The remarks come after Trump has repeatedly threatened to unleash martial law on protesters and pledged that “when the looting starts, the shooting starts” in posts flagged by Facebook and Twitter for glorifying violence. Most recently, Trump’s reelection campaign had 88 ads banned from Facebook on Thursday after they referenced the protest group Antifa, which Trump has attempted to designate a terrorist organization, and included a symbol used by the Nazis to categorize political prisoners in their genocidal concentration camp system.

Like many cities in the US, Tulsa has been rocked by massive Black Lives Matter protests for weeks since the death of George Floyd, a 46-year-old Black man from Minneapolis, Minnesota, who died on May 25 in police custody. The Tulsa Police Department posted a map of the city’s downtown on its Facebook page on Thursday, noting that “the area illustrated in this map will need to be free of vehicles and pedestrian traffic” by Thursday night, after which it will be closed until just before Trump’s rally on Saturday.

Tulsa officials told the Wall Street Journal the city anticipates that, between the Trump rally attendees and the anti-police brutality protesters, as many as 100,000 people will be entering the city on Saturday.