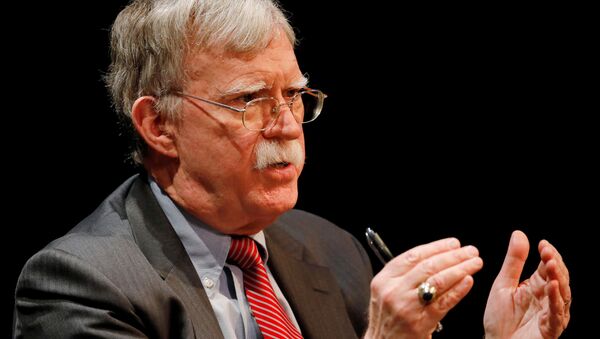 Oleg Burunov
All materialsWrite to the author
In his book due to be released on 23 June, John Bolton, in particular, accuses US President Donald Trump of misusing his powers and claims that POTUS was manipulated and easily influenced by the foreign leaders of China, Russia, Turkey, and North Korea.

John Bolton’s lawyers have filed a motion in court to dismiss a Department of Justice (DOJ) lawsuit against the former US national security adviser aimed at blocking the publication of his upcoming book for reportedly containing highly classified information.

According to the motion, "[…] Defendant John R. Bolton moves to dismiss the [DOJ’s] complaint for failure to state a claim".

NEW: John BOLTON moves to dismiss the Justice Department suit against him for "failure to state a claim." pic.twitter.com/D4yX6mozX9

The lawyers described the DOJ effort as a "regrettable pretext designed to cover up what is in fact a determined political effort to suppress Ambassador Bolton’s speech".

In an accompanying filing, Bolton says effort to stop him from publishing is a "regrettable pretext designed to cover up what is in fact a determined political effort to suppress Ambassador Bolton’s speech".

And it's too late. pic.twitter.com/oj3Oa2ocPq

They also said that 200,000 copies of Bolton’s book have already been bound and distributed to booksellers across the US, with "thousands more" such copies "shipped internationally".

"The government cannot plausibly argue that Ambassador Bolton has power to stop the Amazon delivery trucks in America, unshelve the copies in Europe, commandeer the copies in Canada, and repossess the copies sent to reviewers or in the possession of major newspapers", the document reads.

The document comes as US Secretary of State Mike Pompeo went on Twitter to lash out at Bolton over his book, blaming the former aide for "spreading a number of lies, fully-spun half-truths, and outright falsehoods".

Pompeo added that "it is both sad and dangerous that John Bolton’s final public role is that of a traitor who damaged America by violating his sacred trust with its people".

The remarks came after US President Donald Trump lambasted Bolton’s POTUS-related claims in the book, which was rejected by Trump as "a compilation of lies and made up stories, all intended to make me look bad".

Bolton’s book, which is getting terrible reviews, is a compilation of lies and made up stories, all intended to make me look bad. Many of the ridiculous statements he attributes to me were never made, pure fiction. Just trying to get even for firing him like the sick puppy he is!

On Wednesday, several US media outlets published excerpts obtained from copies of Bolton's book titled "Room Where It Happened: A White House Memoir", before its scheduled release on 23 June.

In the book, Bolton accuses Trump of misusing his powers in a number of cases, including asking China for help in the 2020 election. The former national security adviser also claims that Trump was manipulated and easily influenced by the foreign leaders of China, Russia, Turkey, and North Korea.

000000
Popular comments
Bolton has always been an imbecile and he has absolutely nothing to say, and only American moron can pay for something that another idiot has written, or his ghost-writer for Bolton probably can't write anyway. Seems like in USrael every single dunce feels obliged to write a book. The more dumb, the better.