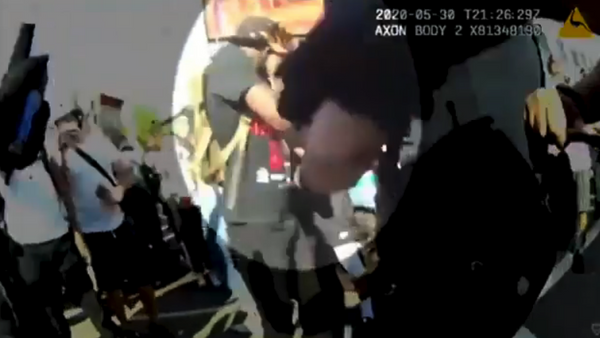 The New York City Police Department (NYPD) has released body camera footage that shows a now-suspended cop pulling down the face mask of a peaceful demonstrator before assaulting the individual with pepper spray.

The NYPD published on Tuesday nearly 30 minutes of body camera recordings, which included a May 30 incident that resulted in the suspension of an unnamed city cop without pay. According to the NYPD’s June 6 release on the matter, the suspended officer has been referred to the Department Advocate's Office “for disciplinary action.”

In the video, officers are seen engaging with a variety of demonstrators both peaceful and rowdy at the scene.

The demonstrator-turned-victim on May 30 is seen wearing a shirt which reads, "We in this together but stay away from me,” and doesn’t seem to display any hostile intent toward the officer at the time of the incident.

The unarmed 46-year-old black man’s death - since ruled a homicide - proved to be the catalyst to a number of demonstrations against police brutality and its disproportionate impact on the black American community.

The NYPD released police body-camera footage of an incident where a police officer pulled down a protester’s face mask and pepper sprayed him.

It comes after the mayor said the city will release body-cam footage within 30 days of serious incidents. https://t.co/RAcqflP8rJ pic.twitter.com/uZ3xj7dtGj

Prior to the decision, the publication of body camera footage was dependent on the police commissioner, who had been granted authority over releases related to an officer’s use of a TASER or firearm that resulted in death or “serious physical injury,” as reported by Courthouse News.

The mayor expressed that he hopes the change in release policy will assist in establishing an improved level of trust between cops and the civilian population.