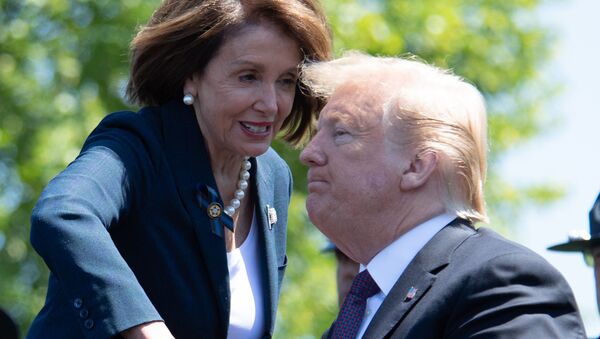 CC BY 2.0 / Pilar Olivares/Office of Public Affairs / Donald Trump and Nancy Pelosi
Subscribe
Trump has harshly criticized the claims made about him in the book, calling the former national security adviser “a disgruntled boring fool, who only wanted to go to war”. The Trump administration is now trying to block the book’s release, which is scheduled for 23 June.

Speaker of the House of Representatives Nancy Pelosi has said that revelations about President Donald Trump detailed in a book by former National Security Adviser John Bolton show that Trump is unfit and unprepared to be president.

Pelosi, an ardent critic of Trump and one of the key figures behind the impeachment inquiry into him, said that the Democrats would continue to have oversight into Trump’s behaviour. "President Trump is clearly ethically unfit and intellectually unprepared to be the president of the United States. That doesn't seem to matter to the Republicans in the United States Senate", Pelosi said at a press briefing.

The US House speaker noted that she is in discussions with leading Democrats about whether to subpoena John Bolton, who served in the Trump administration from 2018-2019.

On 17 June, several excerpts from Bolton’s book “The Room Where It Happened: A White House Memoir” were published in the US media. In his memoir, the former official sensationally claims that Donald Trump sought help from China’s President Xi Jinping to win re-election.

The former national security adviser also backed the Democrats’ allegation that Trump had pressured Ukraine to dig up dirt on Joe Biden, his likely rival in the upcoming presidential elections – a claim that led to an impeachment inquiry into POTUS and ended with his acquittal. Bolton insists that the Democrats committed “impeachment malpractice” by only focusing on Ukraine. The former official claims that if the investigation had been broadened, Americans would have been persuaded that Trump had committed crimes and needed to be removed from office.

Other claims detailed in the book allege that:

Trump has harshly criticized the claims made about him in the book, calling the former national security adviser "a disgruntled boring fool, who only wanted to go to war".

The Trump administration is now trying to block the book’s release, which is scheduled for 23 June. The Department of Justice has filed a lawsuit saying that the memoir contains classified information and is "in clear breach of agreements he [Bolton] signed as a condition of his employment".

Bolton served in the Trump administration as the national security adviser from April 2018 until September 2019. Known for his hawkish stance on international politics, he had major disagreements with Trump over issues such as Afghanistan and negotiations with the Taliban, Iran, North Korea, and Venezuela and reportedly criticised Trump for his soft position.

These disagreements and what Trump labelled as "very big mistakes" led to Bolton’s firing, with the president saying that the former official was not in line "of what we were doing". Trump dismissed reports that his stance on some issues was too soft, saying: "Actually, in some cases he [Bolton] thought it was too tough what we were doing".