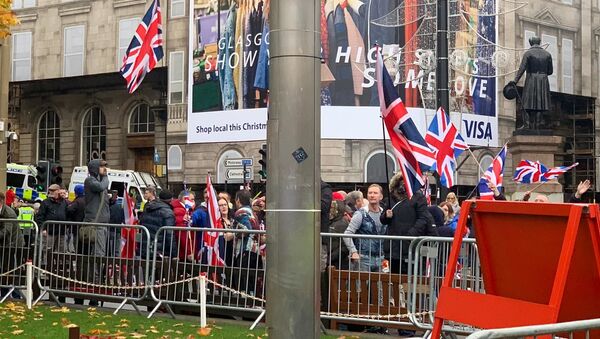 Subscribe
Statues of historical figures have come under threat in the United Kingdom as anti-racist campaigners have called for their removal. This has led to a response from counter-demonstrators who have pledged to defend the structures.

Hundreds of people gathered in George Square, Glasgow on Sunday to oppose a planned demonstration demanding the removal of a statue, even as social media users claimed they may be responding to an alleged fake event created by a group called the Glasgow Youth Art Collective (GYAC).

BREAKING: Black Lives Matter protesters have called off their planned action on Glasgow’s George Square saying there was no easy access to the area - as hundreds of loyalist activists have gathered to ‘protect the statues’ @LBC pic.twitter.com/BHZ3gDlc71

​The protestors, who had come out to defend a statue of Metropolitan Police founder Robert Peel, said they intended to conduct a “peaceful protest” in the "style of a public consultation”.

​The demonstrators received police protection from any potential clashes with counter-protestors and the square was subsequently closed by law enforcement.

GYAC, which claimed on Facebook that it was "not connected to any group", organised the original protest to demand the removal of the Peel statue due to his role as "the founder of the British Police, Tory Party" and for being a "well known racist".

The group later announced there was “no easy access to the square" and cancelled the protest. However, the formation of the GYAC Facebook page just last week and lack of information about the individuals involved has led to some to suggest it was "false flag" operation to justify a counter-demonstration.

The cynic in me suspects that the Glasgow Youth Art Collective was created as a false flag to engineer a rammy by the unionist far right.

​Demonstrators brandished the Union Jack, a symbol in Scotland often associated with maintaining the United Kingdom of Great Britain and Northern Ireland.

George Square today, and I’ll bet thier Twitter header is:

“Love my family, my dog, and the Glasgow Rangers, Hate the EU” pic.twitter.com/1mrvLigtv6

​It is not the first time that a seemingly anti-racist protest has been portrayed in this way. On Friday, a statue of Scottish monarch Robert the Bruce was attacked with graffiti reading "racist king" and "BLM".

Perplexed netizens were quick to question why Black Lives Matter would attack an effigy of a figure who likely never saw a black person and suggested the move may have been done by "unionists" looking to stir up anger.

This is the second Robert the Bruce statue to be vandalised.
Equally a William Wallace Statue has been vandalised in the past few weeks
This has nothing to do with the #BlackLivesMatter protest
this is Ultra Far Right Scottish Unionists determined to attack Scottish heritage pic.twitter.com/T9lYmvtT3m

​The protest in Glasgow comes as the United Kingdom is embroiled in controversy around racism, police brutality, and institutional discrimination within law enforcement.

In London on Saturday, demonstrators turned up to protect the now-encased statue of wartime Prime Minister Sir Winston Churchill after it was defaced during a Black Lives Matter protest last week.

Other statues, such as Bristol's effigy to slave trader Edward Colston, were torn down by crowds sparking a debate over honouring controversial historical figures.