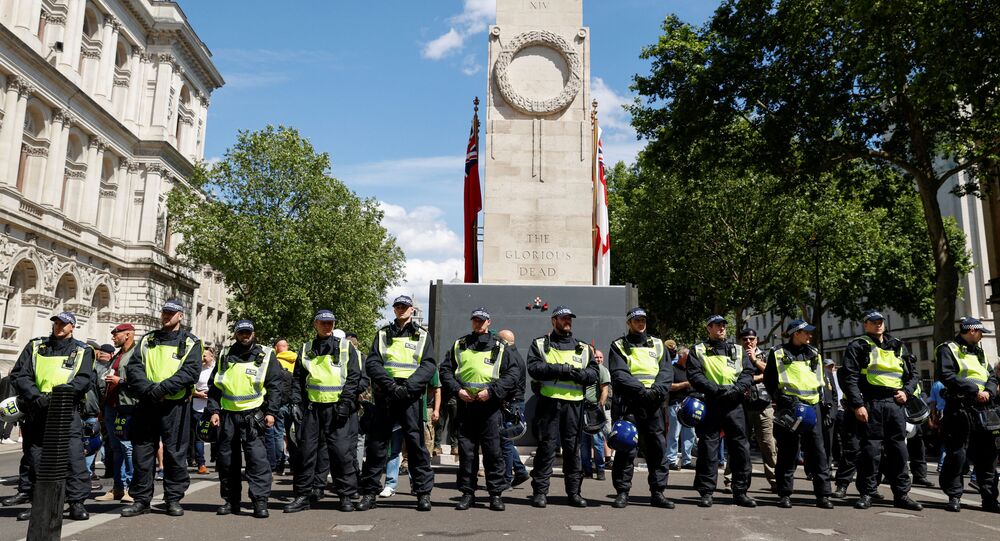 Mr Khan’s comments come after he ordered a formal review of public monuments throughout the British capital over calls for statues of figures with racist pasts to be removed. The British government responded bu saying that to do so would be “to lie about our history.”

Statues of black and Asian political figures in London have been boarded up in order to protect them from attacks by “right-wing extremists,” according to the capital's mayor Sadiq Khan.

Mr Khan claimed that the London Metropolitan Police has received intelligence suggesting that far-right extremist groups were planning to head to London to desecrate the statues of figures like former South African President Nelson Mandela and Indian revolutionary Mahatma Gandhi.

“We have intelligence that extreme far-right groups are coming to London, ostensibly they say to protect the statues,” Mr Khan said this morning to BBC Radio 4's Today Programme.

“We think these statues may be a flash point for violence and we are worried about extreme far-right groups getting involved in violence, vandalism and disorder with those protesting as part of the Black Lives Matter movement, and that’s one of the reasons I’m asking people to stay away from central London,” Khan added.

Khan also cautioned that such protests could encourage another outbreak of coronavirus in London.

A number of Netizens however were not too appreciative of Mr Khan's words.

​BLM Protests Sweep Across the UK

The news comes amid what some have described as a culture war in the UK over the status of public statues depicting historical figures.

Last week during a large Black Lives Matter protest in London - sparked by the killing of George Floyd, an unarmed black man in the US, by a police officer - protestors defaced the monument of Winston Churchill in Parliament Square by writing “was a racist” under his name. Another Black Lives Matter protestor attempted to burn the Union Jack at the Cenotaph - a memorial that commemorates Britain’s war dead.

In response to those incidents, a number of groups that are widely perceived in the UK as belonging to, as Mr Khan described it, “the far-right,” pledged to defend memorials and statues across the UK.

The Democratic Football Lads Alliance urged its members via Facebook to “defend what our war heroes done for this country and their honour.” Former leader of the English Defence League, Tommy Robinson, also called for opposition to protests in a two-minute video posted online in which he accused British police of being “soft handed” toward the protestors.

In response, Khan called for the boarding up of all statues in the capital that are likely to be the focus of protests today, including, controversially, Winston Churchill’s.

“What makes me sad about what’s happening today is that you’ve got a situation in which the statue of Winston Churchill, who is a national hero, has had to be boarded up for fear of violent attack. That to me, is both absurd and wrong,” said Mr Johnson.

Piling on the criticism of Mr Khan, Home Secretary Priti Patel called for Churchill’s statue to be “liberated” from its protective boarding. She went on to accuse Mr Khan of giving into the violent protestors by not condemning them earlier.

Ms. Patel called Mr Khan’s decision a “sad reflection” of his time as Mayor of London.

“We should free Churchill, a hero of our nation, who fought against fascism and racism in this country and Europe,” she told the Daily Mail.

“Had he [Khan] called out the minority who were subversive in a peaceful protest, and had he pulled up the thuggery in the right way, we would not be seeing the boarding up of our national hero,” Ms. Patel added.

Khan shot back quickly, saying that, “I'd just say respectfully to the Home Secretary, she needs to see the intelligence we've seen, which is that the extreme far-right are intending to come to central London, one of their justifications for doing so is to protect these statues, but also they are intending to remove statues of people like Nelson Mandela.”

London police have said that Saturday’s Black Lives Matter protest must end by 5pm and stick to a specific route between Hyde Park and Trafalgar Square. While the counter-demonstrations will have to remain in Whitehall and Parliament Square and also end by 5pm.