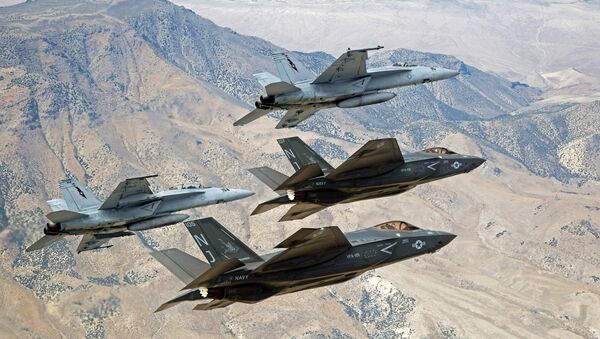 Tim Korso
All materials
The new approach is being mulled in the Air Force after the development of the fifth-generation stealth fighter F-35 took almost two decades, faced numerous cost overruns, and produced a jet plagued by numerous issues.

The US Air Force will soon receive the results of an evaluation of its latest strategy in acquiring new fighter jets for the Next Generation Air Dominance (NGAD) programme, Assistant Secretary of the Air Force for Acquisition Will Roper shared. The evaluation is supposed to determine if the planned strategy, called "Digital Century Series", is feasible and if it will be more cost-effective than the existing approach to developing jets.

"I hope to have the acquisition plan for NGAD rolling into the Digital Century Series this summer. I don’t want to go more specific than that and timeline and drumbeat for the team, because I have given them an unprecedented task", Roper said.

The Digital Century Series (DCS) suggests using digital engineering, open architecture, and the latest advances in software development in designing new fighters. This strategy also stipulates a different approach to working with defence contractors. Now firms will be constantly developing new fighters using any technological advances they have at hand, with the Pentagon choosing a single model from one company in each iteration for small production batches.

According to Roper, this way the Air Force will be getting new, more advanced jets approximately every five years with, contractors constantly competing to design innovations.

The top acquisition officer admitted that the development itself will be more costly as the Department of Defence will have to pay several contractors at the time to design prototypes, but he expects the maintenance costs of these new jets to be considerably lower as their service time will be significantly lower than current 30 years.

The evaluation, which is due to arrive this summer, will reveal whether the new strategy will work that way. If the DCS proves to be more cost-efficient than the existing approach, Congress might agree to fund the experimental strategy. So far US lawmakers have allocated some $1 billion for the NGAD programme for the 2021 fiscal year and $905 million for the 2020 fiscal year.