Chinese Envoy to Russia: We Can't Say That Original Source of COVID-19 Was in China 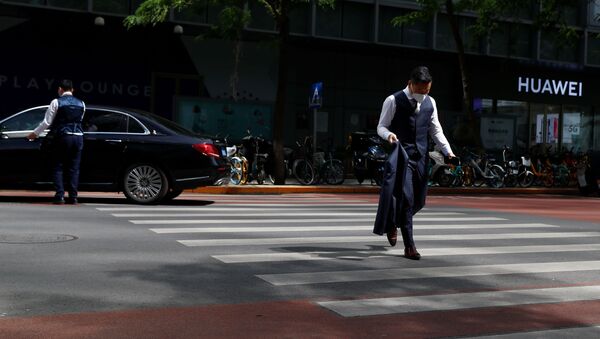 MOSCOW (Sputnik) - China cannot say for sure that COVID-19 originated within its borders just because it discovered the disease earlier than the rest of the world, Ambassador to Russia Zhang Hanhui said on Wednesday.

"There an outbreak in China, but we cannot say that the original source of the coronavirus was in China. We simply detected it earlier than the rest, and took measures", the ambassador said during a press conference at the Rossiya Segodnya International Information Agency.

Ambassador to Russia Zhang Hanhui further elaborated that Beijing supports an independent investigation by the World Health Organisation (WHO) into the origin of COVID-19 while arguing against it being used for political purposes.

"We are against conducting such an investigation in the presumption of guilt mode", the ambassador said.

He has noted that China is ready to cooperate with the WHO as well as other countries.

"It is our duty, our obligation. However, we think that determining the source of COVID-19 is a scientific issue, not a political one", Zhang said.

In May, more than 100 countries at the World Health Assembly, the WHO decision-making body, backed a call for an investigation into the coronavirus disease's origin, despite previous opposition from Beijing.

Satellite Data Indicates China’s COVID-19 Outbreak May Have Started in Summer 2019
COVID-19 was originally reported in the Chinese province of Hubei, making China the first country to face the outbreak, which is still ongoing.

China has been repeatedly accused by the United States of withholding information about the epidemic during its early stages, blaming it for the spread of the disease. Beijing, on its part, has been vociferously denying such allegations, claiming it has been fully forthcoming since day one.

In late December 2019, the Chinese authorities reported an outbreak of pneumonia of an unknown origin in the city of Wuhan. The cause was later determined to be a new type of coronavirus disease designated by specialists as COVID-19. The infection has so far has killed about 410,000 people worldwide.

China's ambassador to Russia, Zhang Hanhui, has blamed western nations for standing behind the unrest in the Asian country's special administrative region of Hong Kong.

"I can say frankly that all these demonstrations, protests, all this chaos are organised by the West", Zhang said at a news conference.

The ambassador went on to claim that "Americans and Westerners" are funding, arming and training the Hong Kong protesters.

"They are doing this vague situation precisely to split China, to create difficulties for the development of China", Zhang postulated.

He went on to say that China and Hong Kong will not back down even if international sanctions are imposed, adding that such restrictions are doomed to fail.

Zhang also expressed gratitude to Russia for support in the standoff surrounding the situation in Hong Kong.

Wide-scale protests have been taking place sporadically in Hong Kong since June 2019, with protesters claiming to oppose Beijing’s increasing influence on the special administrative region. The latest wave of protests was caused by the Chinese central authorities' plans to pass a security bill for Hong Kong.

Chinese FM Calls on UK to Respect Country's Right to Protect State Security in Hong Kong
The legislation, which bans secessionist activities, among other things, is seen by regional residents as undermining their liberties. However, both Hong Kong's leadership and the central government say the legislation would not affect the legitimate rights of regional residents.

Beijing maintains that the unrest in Hong Kong is a result of international interference and claims to respect the "one country, two systems" principle.