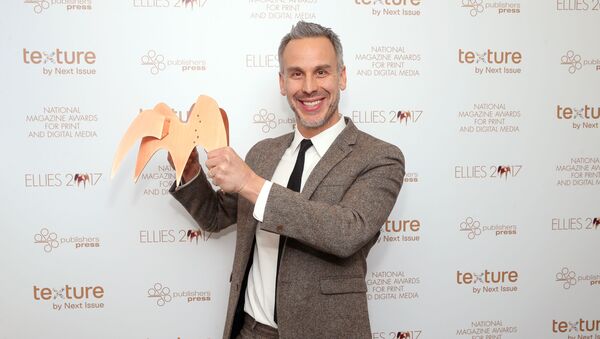 © AFP 2021 / Jemal Countess
Subscribe
The photo has sparked fierce racial justice debates among staffers of Bon Appétit, the widely-renowned publication focusing on test-kitchen videos from around the world, and all across the food journalism sector.

Adam Rapoport, the editor-in-chief of the magazine Bon Appétit, stepped down Monday after pictures of him and his wife Simone Shubuck wearing brownface resurfaced online. “From an extremely ill-conceived Halloween costume 16 years ago to my blind spots as an editor, I’ve not championed an inclusive vision", he said in a statement on his Instagram page.

“And ultimately, it’s been at the expense of Bon Appétit and its staff, as well as our readers", he went on. The editor stressed he would “reflect on the work that I need to do as a human being and to allow Bon Appétit to get to a better place".

The resignation comes hours after Tammie Teclemariam, a freelance food and drinks writer, posted a screenshot of a 2013 Instagram post on Shubuck’s page showing a stereotypical depiction of Puerto Ricans, later noting the image had been sent to her in direct messages by two other people in the food media.

"#TBT me and my papi @rapo4 #boricua", the original caption read, which Teclemariam responded to, fuming on Twitter, where she also reposted the image: “I do not know why Adam Rapoport simply doesn’t write about Puerto Rican food for @bonAppétit himself!!!”

The said infamous image was taken down by noon, The New York Times reported.

Both Bon Appétit, whose test-kitchen videos have become a genuine sensation, and Rapoport himself have been recent targets of criticism, The New York Times reported, citing staff members as saying that the photograph was only the latest in a series of missteps and poor treatment of people of colour at the publication.

Somehow, I’m not surprised by @bonappetit’s EIC in blackface—watch any video of him in the kitchen, and he is CONSTANTLY talking over female chefs in their own videos. I can’t imagine working with him as a BIPOC. Resign, Adam Rapoport. BA, pay your BIPOC contributors!!!

— president of the society for bucky barnes’ welfare (@hairbunbucky) June 8, 2020

idk if any of you are in on the Bon Appetit thing but Hawa only got paid FOUR HUNDRED PER VIDEO. I am..... so angry!!! Claire makes 20k per VIDEO. Sohla only gets paid 50k per YEAR!!

I always had a dislike for Rapoport but this really makes me hate his guts. pic.twitter.com/UGUJg11YX9

Sohla El-Waylly, an assistant editor at Bon Appétit, asserted in an Instagram story that she was “angered and disgusted” by the snapshot lamenting that people of colour were not properly compensated.

Here's a breakdown of Bon Appetit's on-air talent, by ethnicity. Asterisk* indicates they have their own show.

Speaking to BuzzFeed about a Zoom meeting that Rapoport called to apologise to his staff, but faced calls for resignation instead, Sohla El-Waylly said: “I’ve been pushed in front of video as a display of diversity", she wrote.

what's especially disappointing is how innovative and experienced people like Sohla and Gaby are in comparison to like Delany (i love him but he hasn't worked in food nearly as much as others) neways chile... they deserve better

“In reality, currently only white editors are paid for their video appearances. None of the people of colour have been compensated for their appearances", she complained.

Earlier, Alex Lau, an Asian-American journalist who photographed many of the magazine’s top restaurant features, resigned, in part because of the issues in question. “I left BA for multiple reasons, but one of the main reasons was that white leadership refused to make changes that my BIPOC co-workers and I constantly pushed for", he wrote on Twitter on Monday, using an acronym for Black, Indigenous, People of Colour.

The resignations, including Rapoport's, comes as nationwide protests across the US against the death of African American George Floyd have largely boiled over into not merely demonstrations against police brutality, but also racial justice rallies.