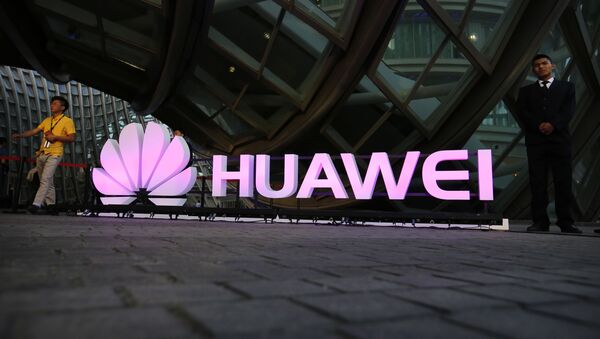 Demond Cureton
All materialsWrite to the author
The world's largest provider of telecoms equipment reaffirmed its pledge to building the United Kingdom's mobile and full-fibre broadband networks across the country, a company letter to the British public on Monday read.

The United States had not provided Huawei Technologies with specific reports or evidence on cybersecurity flaws or vulnerabilities to back its claims, company vice-president Victor Zhang told Sputnik in a presser with UK media on Monday.

"America, as you know, has been telling people that Huawei is creating a security risk, but actually, this is not true. There are no reasons to believe such unfounded truths in the company. What we have been doing in the UK is working with the UK National Cybersecurity Centre (NCSC) since 2011, and we have chosen to remain transparent for over 10 years", Huawei's VP told Sputnik.

Full-Fibre Fallout: How Much Could Possible UK Gov't Phase-Out Of Huawei Cost Britain's IT, 5G Edge?
Huawei's Cybersecurity Evaluation Centre (HCSEC) in Banbury, which works directly with the UK's National Security Advisor and others, "found no security vulnerabilities or backdoors" in the company's network products, he said.

Huawei's roughly 30-year track record showed that the Chinese tech firm was "a very responsible company" whose security solutions had been backed by a third of the global population using digital communications "on record", he added.

Speaking on the need to collaborate on international security standards, he told Sputnik that global organisations such as 3GPP and others had a "very mature model for working not just with the industry, but also governments, with fairness and transparency to discuss these standards".

3GPP had "already taken serious measures on security management" on such standards, he said.

"Actually, 5G from a security standard perspective is more secure than 4G, which is what we understand from our work with 3GPP. We have very standard and normal practices between Huawei and all international standards organisations", he concluded.

The comments follow an open letter to the UK public stating the Chinese firm had operated in Britain for 20 years and was 100 percent "owned by employees", as well as aimed to boost mobile and broadband connectivity across the UK.

"Britain needs the best possible technologies, more choice, innovation and more suppliers, all of which means more secure and more resilient networks. This is fundamental to achieving the government’s Gigabit broadband target by 2025. This is our commitment to the UK,” VP Zhang said in a statement.

“Huawei grew up in the UK. We’ve been here for 20 years and were integral in building the 3G and 4G networks we all use every day," he said.

​The letter added that while many in cities had "fast, reliable connections", poor connectivity made "working from home, or running a small business, harder than it should be".

The Chinese firm aimed to expand Britain's 5G and full-fibre broadband connectivity "to every part of the country" along with creating jobs, training engineers and investing in the country's economy and university, the letter said.

No Man An Information Island: How Tech-Nationalism, US Huawei Ban Harms Global Cybersecurity Efforts
But Downing Street announced in late May it had sought "new entrants into the market" to diversify suppliers and had informed allies, "including the United States" in previous talks.

The UK National Cybersecurity Centre also announced it would assess the impact of phasing out Huawei's IT equipment from UK networks after UK prime minister Boris Johnson approved the Chinese tech giant's role in building IT networks in late January.

But Washington extended its trade ban on Huawei, ZTE and over 70 Chinese tech companies placed on an Entity List in May 2019 a further year over alleged national security concerns. US president Donald Trump and other officials have repeatedly accused Chinese firms of potentially using their 5G and other telecoms equipment to spy for the Chinese government, without providing evidence or further details, with both Beijing and Huawei repeatedly denying the claims.