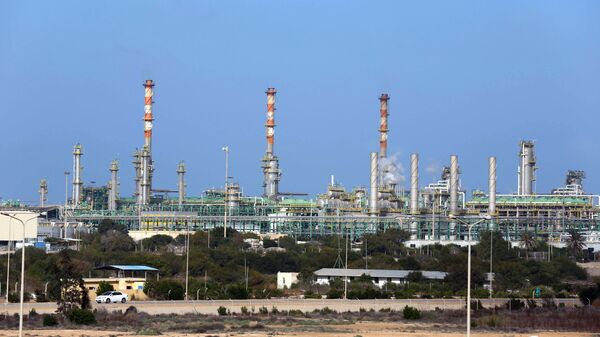 Ilya Tsukanov
All materialsWrite to the author
The Western and Turkish-backed Government of National Accord (GNA) announced that it had reestablished full control over Tripoli last week, with Egyptian President Abdel Fattah Sisi announcing a new Cairo-backed peace initiative to settle Libya’s long-running civil war for good.

Situated in the Murzuq Desert in southwestern Libya, the El Sharara oil field has the capacity to produce about 300,000 barrels per day (bpd), and a total estimated reserve of over 3 billion barrels, but has been producing only a fraction of that recently amid a five month oil blockade by Haftar’s forces.

Libya’s oil output, which topped 1.5 million bpd before the ouster and killing of Muammar Gaddafi in 2011, has faced a sharp decline in recent years as the country descended into chaos, with production reaching stable 1 million bpd+ figures only in mid-late 2018. In early 2020, production plummeted to as little as 70,000-80,000 bpd as a result of the blockade, which led to the shutoff of pipeline infrastructure and refinery facilities.

Workers at the El Sharara field expect to gradually ramp up production from the current 20,000 pbd after the reopening of a pipeline connecting the field to the Zawiya export terminal and refinery outside Tripoli, which was reopened on Friday.

According to S&P Global, GNA forces’ recent string of victories against Haftar’s LNA caused local militias to switch sides, with the Tripoli-based National Oil Corp engaging in negotiations with tribal groups controlling the field, as well as the nearby El Feel fields, which have a 75,000 bpd output capacity, on the resumption of production.

The LNA continues to control major oil export terminals in the country’s east, with most of the country’s largest fields situated in the Tobruk-government-held east.

Libya, home to Africa’s largest proven oil reserves, and once one of the most developed countries on the continent, collapsed into a failed state after Gaddafi’s overthrow by rebels backed by NATO air power. In the years that followed, various factions, criminal gangs, and Islamist terrorist groups established control of large chunks of the country. The largest factions – the Government of National Accord in Tripoli and the Tobruk-based House of Representatives supported by Haftar, emerged as the country’s largest competing power blocs, and have engaged in a series of armed clashes after defeating smaller rivals. In the spring of 2019, Haftar’s forces began an offensive to try to capture Tripoli, with the operation crawling to a halt in early 2020 after Turkey deployed substantive arms support and combat troops to back the GNA.

On Saturday, Egyptian President Abdel Fattah Sisi announced a Cairo-backed plan to end the Libyan conflict via a political settlement, starting with a ceasefire beginning Monday and including the withdrawal of foreign troops from the country. The proposal has reportedly been accepted by General Haftar. The Tripoli government has yet to comment on the proposal.  However, GNA forces announced earlier that they would continue their campaign to take Sirte, a strategic city east of Tripoli, which had been captured by the LNA in January.