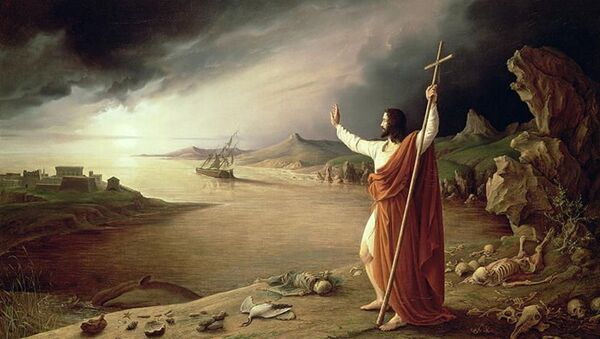 Listing the dire portents contained within the Christian texts, Professor Tom Meyer noted that they eventually culminate in the second coming of Jesus Christ.

The global coronavirus pandemic that has been ravaging the world has apparently led a number of people to recall the doomsday prophecies from the Bible and to start considering spiritual matters.

The religious texts outline a specific chain of events that will precede the second coming of Christ during the end of days, the Daily Express points out.

According to the newspaper, Tom Meyer, an American college professor known as "The Bible Memory Man" for his ability to quote over 20 books of the Bible from his memory, said that during the first century, many Christians were actually "shaken out of their wits and disturbed with the signs of the times", adding that "it is possible that false teachings and the intensity of the church’s persecution by Rome made some think that the end times had begun".

"Perhaps a false prophecy to this effect was circulating in the churches, much in the same way that we today hear again and again that we belong to the terminal generation", he mused. "Concerning their distress, the Apostle Paul thought it would be helpful to tell the early church in Thessalonica and, by application, the world today the sequence of events leading up to the Second Coming of Christ."

The Order of Events

While the first of the events to come outlined by Paul turns out to be apostasy, Meyer noted that the Greek word "apostasia" can be interpreted both as "defection" and as "departure".

"Most Christians think it means a departing from the cardinal doctrines of the Christian faith, but it probably means a departure of the church itself. The church 'departing' or being Raptured is the first event", he said.

The second event is supposed to be the Antichrist revealing himself, followed by the third event: the "opposition towards the God of Israel", as the Antichrist "will elevate himself about the living and true God".

"The fourth event is in the yet-to-be-constructed third JewishTemple; the Antichrist will 'continually display himself' as the real Messiah in Jerusalem", Meyer added.

He also speculated that while the fifth prophecised event, the so called "mystery of iniquity", "cannot be fully understood even in Paul's time", it is likely some kind of "satanic counterpart to the mystery of God's purpose", as the newspaper put it.

"The final and sixth event is that the true Christ will be revealed from heaven and the bright light of His coming will consume the Antichrist", the professor surmised.