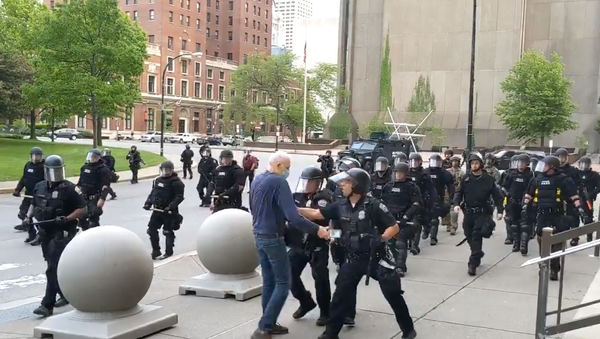 Video footage emerged on Thursday showing police officers in the city of Buffalo pushing to the ground a 75-year-old unarmed man who subsequently hits his head and, remaining motionless, begins to bleed onto the concrete. City authorities responded to the incident condemning the officers' behavior.

An entire unit of the Buffalo Police Department resigned en masse from their posts on Friday following the suspension of two officers who pushed a 75-year-old unarmed man backwards onto the ground, Buffalo News reports.

57 members from the department's Emergency Response Team, which responds to riots and other situations of unrest, stood down from the unit.

The Emergency Response Team has not withdrawn from the police department, however, only from the tactical unit, according to Buffalo News.

"It doesn't specify clear the square of men, 50 and under or 15 to 40. They were simply doing their job. I don't know how much contact was made. He did slip in my estimation. He fell backwards," the union boss suggested.

Erie County Executive Mark Poloncarz confirmed the 57-member team’s resignation from the tactical unit during a press conference Friday. Poloncarz noted that he was "exceptionally disappointed" as the largely symbolic move indicated that the officers "did not see anything wrong with the actions last night".

"If they resigned, I'm exceptionally disappointed by it because it indicates to me that they did not see anything wrong with the actions last night," Poloncarz said after being asked about the ERT Team resigning. pic.twitter.com/gbQ4Z7vKr5

​The announcements follow the revelation of the graphic video in Niagara Square, Buffalo, showing officers pushing the unarmed man who then falls backwards onto the sidewalk to lie motionless as blood begins to pour out of his head.

Buffalo Police Commissioner Byron Lockwood ordered the suspension of the officers involved, following the incident. The man involved was admitted to hospital and is said to be in stable condition, according to Polocarz.

Demonstrations throughout the US in response to the death George Floyd, an African American man who died at the hands of white police officers while being arrested, has exposed anger at widespread police brutality across the country.