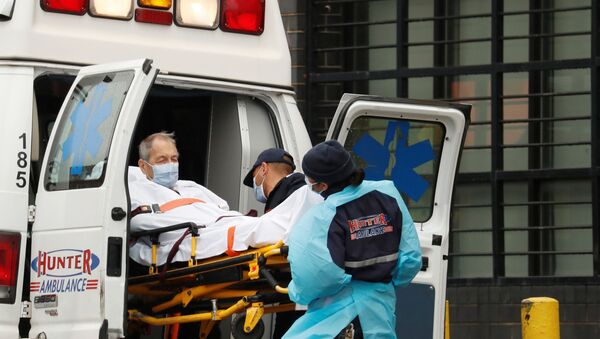 © REUTERS / Lucas Jackson
Subscribe
A new study published in the journal Science finds that the COVID-19 coronavirus strain spreading in New York most likely did not come directly from China, the original epicenter of the disease, but from Europe.

The study, which was led by Icahn School of Medicine at Mount Sinai (ISMMS) researchers, found that the coronavirus outbreak in New York “predominantly arose through untracked transmission between the United States and Europe, with limited evidence to support any direct introductions from China,” according to a June 2 news release by Mount Sinai.

The findings were based on the sequencing of “90 SARS-CoV-2 genomes from 84 of over 800 confirmed COVID-19 positive cases within the Mount Sinai Health System.” The samples of SARS-CoV-2, the virus that causes COVID-19, were collected from patients that were receiving treatment for the disease from the Mount Sinai Health System between February 29 and March 18. The study involved 44 women and 40 men between the ages of 20 and 80.

“We sequenced genomes from COVID-19 cases identified up to March 18,” Harm van Bakel, assistant professor of genetics and genomic sciences at ISMMS, is quoted as saying in the news release. “These cases were drawn from 21 New York City neighborhoods across four boroughs (Manhattan, Bronx, Queens and Brooklyn), as well as two towns in neighboring Westchester County.”

The researchers then compared the sequences with more than 2,000 publicly available coronavirus genomes from around the world to identify the likely origin of the strain that had infected New York City residents who were receiving treatment from Mount Sinai.

A study completed by scientists at the New York University Langone Health academic medical center in April also examined viral samples from 75 COVID-19 patients in the city. The researchers found that about two-thirds of the infections were imported from European countries like Britain, France and Austria.

The first COVID-19 case in New York was reported on February 29. Since then, almost 400,000 cases have been confirmed in the state, and more than 30,000 people have died as a result of the disease, according to the latest data from Worldometer.