'We'll Not Back Off': Chinese Troops Crossed Into Indian Side, Admits India's Defence Minister 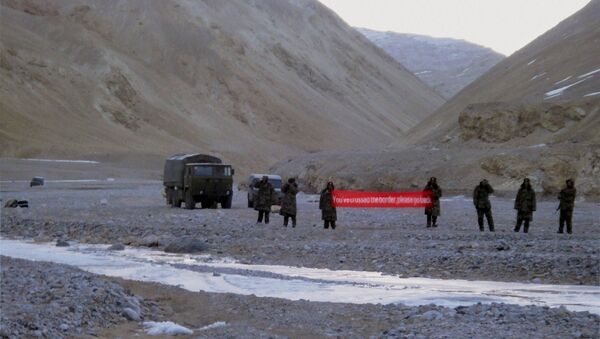 © AP Photo
Subscribe
International
India
Africa
New Delhi (Sputnik): India and China have been engaged in a border stand-off since the last week of April, which is the longest since the 2017 Doklam stand-off. The ongoing situation in the eastern Ladakh region erupted after Beijing accused New Delhi of building defence infrastructure on the Chinese side of the Line of Actual Control.

In a first public admission, India's Defence Minister Rajnath Singh said that People's Liberation Army troops crossed into the Indian side of the Line of Actual Control in early May, adding, however, that India had taken the necessary steps, while sending a large number of troops to match the Chinese deployment in the contested Ladakh region.

"Our policy is very clear that we will not hurt [the] self-respect of our neighbours, but I assured the nation that the government would not let anyone hurt India’s self-respect as well", Rajnath Singh said in an interview with the channel News 18 on Tuesday.

The minister said that solutions are being found through military and diplomatic talks. He said that Army Chief M.M. Naravane had informed him about a high-level military leaders' meeting on 6 June to settle the issue peacefully.

“This kind of tension escalated in the past as well and a solution was found”, he said, referring to the 73-day Doklam stand-off in 2017.

The Indian Army and the People’s Liberations Army have been engaged in a stand-off over "no man’s land" in the eastern Ladakh region’s Galwan Valley and Pangong Tso for more than a month.

Both Beijing and New Delhi have conducted eight rounds of talks to de-escalate the tensions, but the two sides continue to maintain aggressive posturing in the disputed border areas.

The escalating build-up along the 4,057-kilometre loosely demarcated Line of Actual Control has turned into the most serious confrontation between the two countries since the 73-day Doklam stand-off in 2017, when Indian troops destroyed bunkers and a road laid by Chinese troops near the tri-border junction of India, China, and Bhutan.