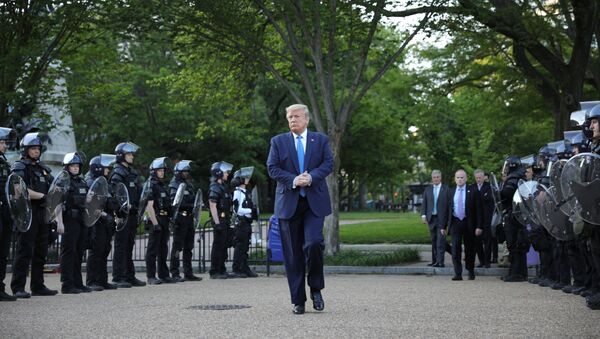 US President Donald Trump on Monday said he would deploy US military to states that don't use the National Guard in sufficient numbers to dominate the streets as protests against police brutality rage across America.

“Our nation has been gripped by professional anarchists, violent mobs, arsonists, looters, criminals, rioters, Antifa, and others," Trump said in the White House Rose garden as flash-bang grenades went off in Lafayette Park in the nation's capital.

​“These are not acts of peaceful protest, these are acts of domestic terror," Trump said, referring to the riots that started last week following the murder of unarmed African-American man George Floyd by former police officer Derek Chauvin in Minnesota on May 25.

"We cannot allow the righteous cries and peaceful protesters to be drowned out by an angry mob," Trump said.

"A number of state and local governments have failed to take necessary action to safeguard their residents ... that is why I am taking immediate presidential action to stop the violence and restore security and safety in America. I am mobilizing all available federal resources - civilian and military - to stop the rioting and looting, end the destruction and arson and to protect the rights of law-abiding Americans, including your Second Amendment rights. Therefore, the following measures are going into effect immediately. First, we are ending the riots and lawlessness that has spread throughout our country. We will end it now," Trump added.

"Today, I am strongly recommended to every governor to deploy the National Guard in sufficient numbers that we dominate the streets. Mayors and governors must establish an overwhelming law enforcement presence until the violence has been quelled. If a city or state refuses to take the actions that are necessary to defend the life and property of their residents, then I will deploy the US military and quickly solve the problem for them," Trump continued.

Immediately following his remarks, Trump was seen walking on foot across Lafayette Park, where protesters had just been violently dispersed with tear gas and flash-bang grenades. The president was soon thereafter seen standing in front of St. John's Episcopal Church, which was damaged in a fire Sunday night. He was also pictured holding up a bible near the church.

US Senator Tom Cotton (R-AR) on Monday also urged that the US military be deployed across the US to subdue the weeklong riots and uprisings that have been sparked by Floyd's brutal murder.

“Anarchy, rioting, and looting needs to end tonight,” Cotton tweeted. "If local law enforcement is overwhelmed and needs backup, let's see how tough these Antifa terrorists are when they're facing off with the 101st Airborne Division. We need to have zero tolerance for this destruction.”

Deploying the US military across US states would be an invocation of the 213-year-old Insurrection Act, which was last put into effect during the 1992 Rodney King riots in Los Angeles, California. Under the act, US troops would be permitted to carry out law enforcement missions. To invoke the act, the US president would first have to deliver a proclamation to "immediately order the insurgents to disperse and retire peaceably to their abodes within a limited time."

Trump on Sunday also revealed on Twitter that he would be “designating ANTIFA as a terrorist organization." Antifa are groups of anti-fascist protesters who resist white supremacist actions.

At least 4,400 people have been arrested in the US over the seven consecutive days of riots and protests in US cities, according to the Associated Press.

Floyd died after Chauvin refused to remove his knee from Floyd’s neck while holding him down on the ground. Disturbing cellphone footage captured Chauvin openly ignoring Floyd's pleas, even after he repeatedly said that he could not breathe.

A criminal complaint released Friday showed that Chauvin kept his knee on Floyd's neck for a total of eight minutes and 46 seconds. Floyd was unresponsive for two minutes and 53 seconds while the officer’s knee was still pressed on his neck.

Officers came in contact with Floyd after dispatchers received a call about a man trying to use forged money at a grocery store. Three other Minneapolis Police Department officers who were involved in Floyd's arrest have also been fired. They are currently under investigation, and it is still unknown what charges, if any, they may face.