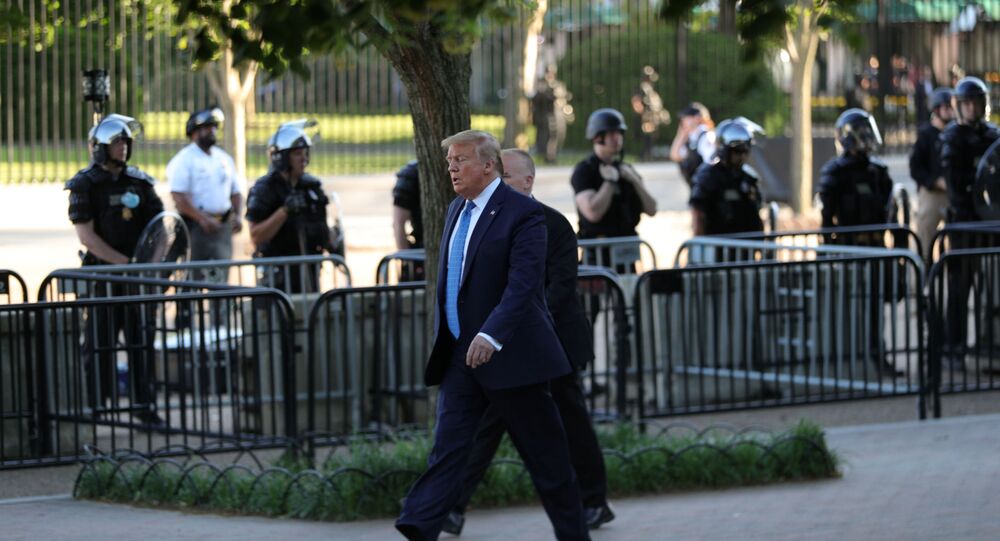 US President Donald Trump was seen standing in front of St. John's Episcopal Church in Washington, DC, on Monday evening amid the beginning of the city's scheduled curfew.

US Secret Service agents were seen guarding the president as he walked from the White House to the historic Greek Revival Episcopal church, which was damaged in a fire last night.

I almost can’t believe what I’m seeing. POTUS just walked out the front door of the White House and into Lafayette Square - the epicenter of the DC protests - to visit historic St. John’s Church, which was set on fire last night. pic.twitter.com/XueoF2RC6z

CBS News journalist Weijia Jiang reported that the US president "held up a bible for several minutes and took pictures with staff" while near the church.

"We have a great country - that's my thoughts. Greatest in the world," Trump said as he held up the holy book and posed for pictures. The US president noted that he was not holding his personal bible.

The US president's excursion was brief, and he was back on White House grounds before 7:15 p.m. local time.

A Sputnik correspondent in the area detailed that military police rode in on horseback around 6:30 p.m. and deployed both tear gas and flash-bang grenades in a "very sudden, very violent" move against peaceful demonstrators who were kneeling in protest for five minutes.

Chased away suddenly and violently from the WH, half an hour before curfew. Minutes before we'd been kneeling. There was no provocation.#DCProtests pic.twitter.com/Mxmo6gDfxd

Impact from the launched projectiles can be overheard in aerial footage from the scene.

Heavily armed federal officers fired gas canisters at a crowd of nonviolent demonstrators outside the White House. 'This was a peaceful protest,' CNN analyst Jackie Kucinich wrote. 'And they are using tear gas. In the United States. In front of the White House.' pic.twitter.com/kRq3vyV13I

ABC7's live broadcast captured footage of cops assaulting civilians while clearing Lafayette Park. The scene in this clip occurred prior to the 7 p.m. local time curfew.

Um, what? This just aired on @ABC7News. pic.twitter.com/tyAQdlsFnf

Military vehicles have been stationed in Farragut Square as the curfew begins in Washington, DC.

A closer look at the military vehicles near Farragut Square #DCProtests pic.twitter.com/i3vAIW4OmW

Authorities have also taken to the skies, and at least one Black Hawk chopper was observed patrolling the city.

The US military is patrolling #DC with Black Hawk helicopter gunships tonight, I can hear them flying circles overhead #dcprotests https://t.co/wpt30sMHdo

Reinforcements from the National Guard and other active-duty military troops have descended on the US capital to assist with enforcement of the city's curfew - which is slated to be enforced on Tuesday night as well.

Some protesters refused to go home - or even leave the streets.

Arrests being made at 16th and I. Presumably the arrests are for DC curfew violations. All protesters I’ve seen have been peaceful. pic.twitter.com/z24lDepT2S

This out-of-state assistance and preemptive enforcement of the curfew comes two days after Metropolitan Police Chief Peter Newsham railed against outside parties getting involved.

"We can't have people coming into our city who are going to destroy property or hurt people," he said on Saturday. It's unclear if officers will be held to the same standard.