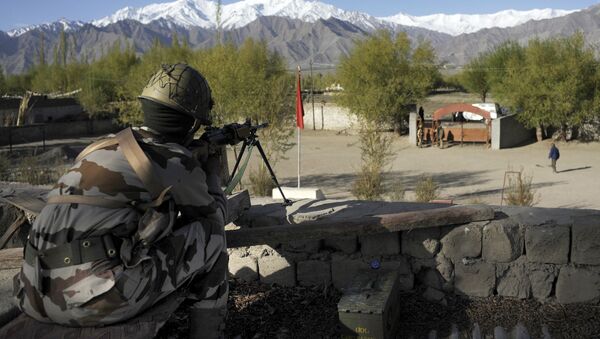 © AFP 2023 / Manpreet ROMANA
Subscribe
International
India
Africa
New Delhi (Sputnik): India and China say they are using diplomatic channels to deflate border tension but the heavy movement of troops and vehicles suggest otherwise. The Asian giants have been in a conflict over infrastructure development near the Line of Actual Control.

Satellite images show strategic movements of Indian and Chinese troops, the upgrading of air bases and aircraft movements along the 4,057 km Line of Actual Control. The images also reflect the work of digging trenches and preparing bunkers above Pangong Lake and at the Galwan Valley.

​The satellite image published by open source intelligence firm ShadowBreak Intl, show heavy vehicular activity from China’s People’s Liberation Army over the past three week near the Hotsprings Sector, which is 15km from India’s Gogra base and 6km from the Line of Actual Control — the de facto border that divides the two nations.

Images via @planetlabs @sbreakintl help spot the #China PLA camp near the #Hotsprings Sector few Kms behind the LAC (Here china contests the LAC), approximately 11Kms North West of the #India base at Gogra, this unit size is the largest seen till now with adequate vehicle tracks pic.twitter.com/9eywCqD1Bk

​China has been rapidly developing military its airbase at Ngari Gunsa in Tibet. A large area parallel to the 4,500 metre runway has had earthworks going on since April 2020, probably a second runway. The base is 200km from Pangong Tso and 340km from the Galwan River.

Recent satellite images via @sbreakintl @PlanetLabs
show a large area parallel to the runway at #Ngari Gunsa dual use airbase being rapidly developed since April 2020, as tensions between #India & #China continue to rise pic.twitter.com/1S2XQKHjZS

Base apron revisit in hi-res shows the detachment of #China PLAAF Flankers on site May 2020 (first seen in DEC 2019) pic.twitter.com/H6zIXmGIDr

Images from Pangong Tso show the People’s Liberation Army across the Line of Actual Control with boats and tent accommodation.

Satellite images from the #PangongTso sector now show the actual on ground situation, plotting presence of #China PLA on its side of the LAC with boats & possible tent accommodations .. mirroring the #India military base on the opposite end pic.twitter.com/XUeefQU3dm

​The developments along the border have come following clashes between the troops of both armies at Pangong Tso. China had raised an objection over the infrastructure development along the 4,057km Line of Actual Control.

However, Indian defence minister Rajnath Singh, while chairing a high level meeting with three service chiefs and the Chief of Defence Staff Bipin Rawat, directed the army to continue the ongoing infrastructure development projects on the Indian side of the Line of Actual Control (LAC).
India has been constructing 61 highways along the LAC and several passes in the Himalayan region to improve access to the border.