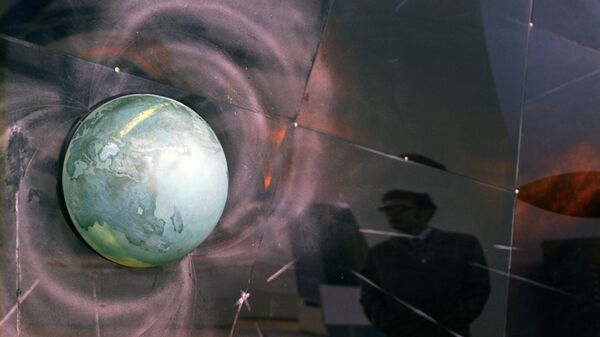 The Earth has a moderately strong magnetic field, which is generated by superheated liquid iron that makes up the outer core of our planet. The magnetic field is vital to life as it shields the Earth’s ozone layer from solar winds, cosmic rays, and harmful ultraviolet radiation.

The Earth’s magnetic field is weakening, the European Space Agency (ESA) said in a statement, citing data from its Swarm mission, a constellation of satellites that was launched in 2013. According to the ESA, over the last 200 years, the Earth’s magnetic has field has lost 9 percent of its strength.

In 1958, scientists discovered the South Atlantic Anomaly, an area that sits between Africa and South America where the magnetic field has been weakening considerably. According to the ESA’s latest study, this area has grown and moved westward at a pace of around 12 miles (20 km) per year and scientists cannot explain why.

Moreover, according to data provided by the Swarm mission, which studies our planet’s magnetic field, a second area with less strength has emerged in South Africa, which the ESA says could be a sign that the South Atlantic Anomaly "could split up into two separate cells".

"The new, eastern minimum of the South Atlantic Anomaly has appeared over the last decade and in recent years is developing vigorously", said Jürgen Matzka, from the German Research Centre for Geosciences. "We are very lucky to have the Swarm satellites in orbit to investigate the development of the South Atlantic Anomaly. The challenge now is to understand the processes in Earth’s core driving these changes", Matzka said

The space agency said one hypothesis that may explain the magnetic field’s bizarre behaviour is a reversal of the North and South Poles, a process during which the poles switch places. It has occurred many times throughout the planet’s history and the ESA says "we are long overdue by the average rate of roughly 250,000 years".

The ESA said that at the moment, the weakening of the magnetic field, which protects our planet from cosmic radiation and charged particles emitted by the Sun, poses no risk for humans. However, satellites and spacecraft that fly through an area with reduced field strength are more likely to experience technical malfunctions.