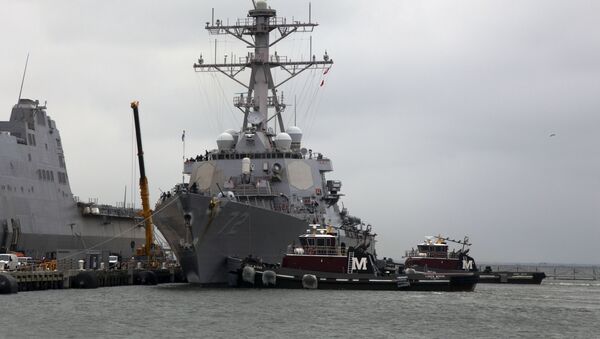 The US Government Accountability Office (GAO) watchdog has recommended the US Navy conduct its own analysis of its contracting approach after it was recently determined that ship maintenance schedule outcomes were less than positive and led to unexpected delays.

Despite the Navy shaving down initial price estimates for ship repairs through the implementation of its Multiple Award Contract-Multi Order (MAC-MO) contracting strategy in 2015, the US Navy has observed a number of setbacks from the pilot program, according to a 61-page report released by the GAO on May 11.

“We found that the Navy has lowered costs from initial estimates for ship repair. But that work continues to run over schedule - due, in part, to the extra time it often takes to coordinate funding for additional repairs that may have been expected but could not be quantified when the contract began,” the audit institution noted.

The GAO highlighted that while the Navy was planning to test a solution to these issues via a pilot program, it does not appear that it has the intention to assess that program’s impact on the service.

The report was centered on the performance of the Mid-Atlantic Regional Maintenance Center (RMC) in Norfolk, Virginia; the Southeast RMC in Mayport, Florida; and the Southwest RMC in San Diego, California.

Auditors found that, for the Norfolk-based RMC, only three of the 24 ships that went in for repairs between 2015 and 2019 saw those repairs completed on schedule, averaging a total schedule growth increase of 38%.

Within this same period, Mayport’s RMC completed six out of 10 scheduled repairs on time, and the RMC in San Diego was able to finish three ship repairs out of seven on time.

The audit institution recommended acting Secretary of the Navy James E. McPherson “establish an analysis plan for the evaluation of the pilot program” and stated that the service “concurred with GAO’s recommendation.”

The report did note that the MAC-MO approach implemented by the Navy had resulted in increased competition opportunities, added flexibility to ensure quality of work and limited cost growth since 2015.

“During this period, 21 of 41 ship maintenance periods, called availabilities, for major repair work cost less than initially estimated, and average cost growth across the 41 availabilities was 5 percent,” the GAO explained.