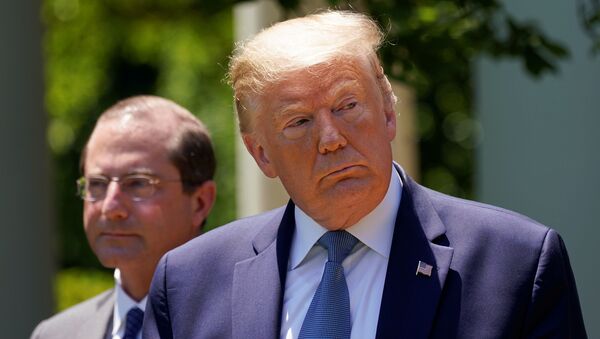 Hacker group REvil was originally seeking $21 million from a prominent entertainment law firm after obtaining highly-confidential documents on celebrity clients, but the cybercriminals recently doubled their demand, now claiming to also have “a ton of dirty laundry” on US President Donald Trump.

REvil announced Thursday that it was raising the stakes in an ongoing effort to obtain tens of millions of dollars from entertainment law firm Grubman Shire Meiselas & Sacks - which has represented several high-profile clients, such as Nicki Minaj, Lady Gaga, Mariah Carey and Bruce Springsteen.

“The ransom is now $42,000,000,” the hackers said on their dark web site, as observed by Vice News. “The next person we’ll be publishing is Donald Trump. There’s an election going on, and we found a ton of dirty laundry on time.”

However, Vice noted that the law firm is not known to have any connection to Trump or his companies, so the nature of any information the hackers may have acquired is unclear.

Sputnik reported earlier this week that the notorious hackers’ attack was confirmed by the law firm. According to the group, around 756 gigabytes of confidential documents were lifted in the cyberattack, including phone numbers, email addresses, nondisclosure agreements and other private information belonging to a slew of celebrities.

This time around, however, the cybercriminals threatened more than just the firm’s founder Allen Grubman - dubbed Vanity Fair’s “most powerful attorney in the music business" in 2015.

“Mr. Trump if you want to stay president, poke a sharp stick at the guys, otherwise, you may forget this ambition forever. And to you voters, we can let you know that after such a publication, you certainly don’t want to see him as president,” REvil claimed.

“Well, let's leave out the details. The deadline is one week,” it revealed.

The group’s self-named ransomware “REvil,” previously known as “Sodinokibi,” was identified as the malware used to infiltrate the law firm’s systems. The ransomware was also linked to a New Year’s Eve 2019 attack on British currency-exchange company Travelex, leading to a $2.3 million payout being issued to the criminals earlier this year.

In a statement to Page Six, Grubman’s law firm noted it would not be delivering a cent to the “cyberterrorists.”

“We have been informed by the experts and the FBI that negotiating with or paying ransom to terrorists is a violation of federal criminal law. Even when enormous ransoms have been paid, the criminals often leak the documents anyway,” the statement read.

As for the US president, his campaign has yet to provide a statement on the matter. Despite Trump’s history of hush payments to alleged mistresses, it’s unlikely that he will write a check to the cybercriminals following nearly four years of scandals that were each predicted to bring an end to his political career.