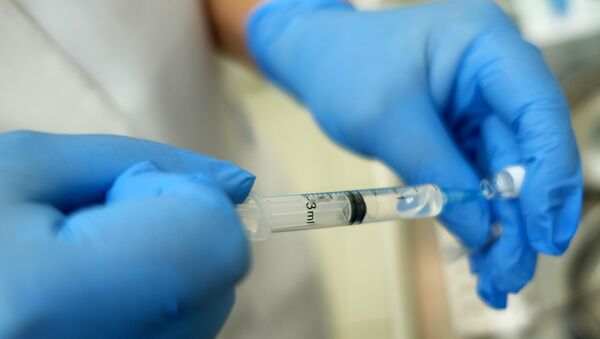 WASHINGTON (Sputnik) - The US government has signed a $138 million contract with a syringe and injector-making company to boost domestic production capacity in making devices to deal with the coronavirus (COVID-19) crisis, the Department of Defence said in a statement.

"Today the Department of Defence and the Department of Health and Human Services announce a $138 million contract with ApiJect Systems America for 'Project Jumpstart' and 'RAPID USA'", Defence Department spokesman Lieutenant Colonel Mike Andrews said in the statement on Tuesday.

Andrews said the deal will dramatically expand US production capability for domestically manufactured, medical-grade injection devices starting by October of this year.

"'Jumpstart' will enable the manufacture of more than 100 million prefilled syringes for distribution across the United States by year-end 2020", Andrews said.

The contract also enables ApiJect Systems America to accelerate the launch of the RAPID USA manufactured in new and permanent US-based facilities with the goal of producing over 500 million prefilled syringes in 2021, the statement added.

As of 12 May, the United States has more than 1.34 million confirmed cases of COVID-19 and around 81,000 deaths caused by the disease, according to data assembled by the US Centres for Disease Control and Prevention.