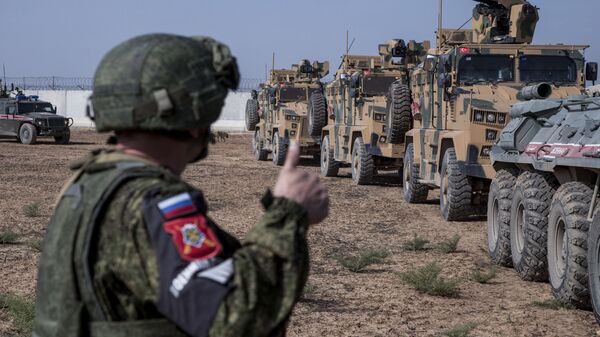 SARAQIB, Syria (Sputnik) - The Russian and Turkish military on Tuesday conducted the tenth joint patrol along the M4 highway in Syria's northern Idlib de-escalation zone, the Russian Defence Ministry's centre for the reconciliation of the warring parties in Syria said in a statement on Tuesday.

"The tenth joint Russian-Turkish patrol of the M4 highway's section in the Idlib de-escalation zone linking the cities of Aleppo and Latakia took place on 12 May 2020," the statement said.

According to the statement, seven Russian vehicles participated in the joint patrol, which was also supervised by the Russian Air Force's drones from the air.

Russian President Vladimir Putin and his Turkish counterpart, Recep Tayyip Erdogan, confirmed on March 5 their commitment to the Astana format on Syria, announced a ceasefire in the Idlib de-escalation zone and agreed upon joint patrols of the strategically important M4 highway, connecting Aleppo and Latakia.

Syrian military engineers have diffused 29 explosive devices on 1.5 hectares (3.7 acres) over the past 24 hours, the Russian Defence Ministry added.

"Engineering units of the armed forces of the Syrian Arab Republic performed mine clearance tasks in Arbil, Duma, Mazraat Mahmud and Hawsh al-Farah (Damascus province), Jasim, Anhul, Kafr Shams and Al Harah (Daraa province) over the past 24 hours. [A total of] 1.5 hectares were cleared, 29 explosive objects were found and destroyed," the ministry said in its daily bulletin.