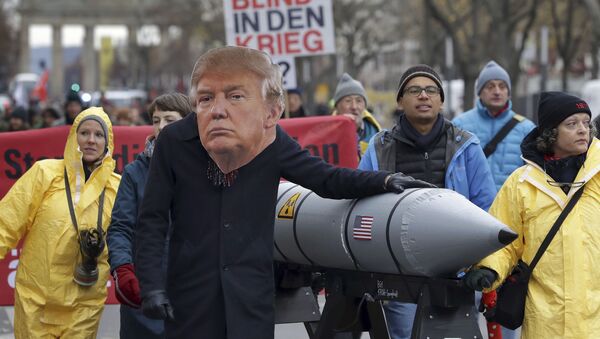 © AP Photo / Michael Sohn
Subscribe
Ilya Tsukanov
All materialsWrite to the author
The appeal comes as leaders from the SPD, Germany’s second-largest party and member of Chancellor Merkel’s governing coalition, demand the withdrawal of US nuclear weapons from the country’s airbases.

NATO Secretary General Jens Stoltenberg has thrown his hat into the debate surrounding the storage of about 20 US B61 nuclear bombs at the Buchel Airbase in western Germany, penning an op-ed in German media in which he suggests Russia and other actors are to blame for the need to keep the bombs where they are.

“Around the world, terrorism continues, authoritarian regimes challenge liberal democracies, and we see the proliferation of nuclear weapons to countries like North Korea, as well as the continuing aggressive actions by Russia,” Stoltenberg wrote in an a piece published by Frankfurter Allgemeine Zeitung.

Charging Russia with investing “significantly in its military capabilities, and especially in its nuclear arsenal,” Stoltenberg claims that “while NATO views its own nuclear deterrent as a political tool, Russia has firmly integrated its nuclear arsenal into its military strategy.” Moscow, he added, “has placed nuclear-capable missiles in Kaliningrad, just 500km from Berlin. It has threatened Allies such as Denmark, Poland and Romania with nuclear strikes.”

The figures seem to tell a different story. In February, the Pentagon estimated that Russia has spent the equivalent of $28 billion modernizing its nuclear forces. For comparison, the US is in the middle of a $1.5 trillion program to upgrade its nuclear arsenal, (i.e. as much as 53 times more than Russia). It’s also the US, not Russia, which scrapped the Anti-Ballistic Missile Treaty, withdrew from the Intermediate-Range Nuclear Forces Treaty in 2019, and has shown little interest in renewing the soon-to-expire New Strategic Arms Reduction Treaty (New START), while halting the disclosure of information about the size of its nuclear weapons stockpile in April 2019. 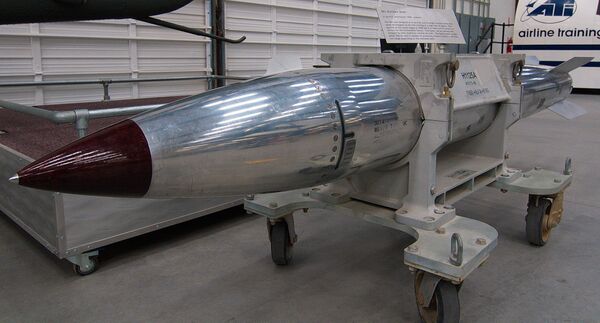 Furthermore, Russian officials have repeatedly stressed that Moscow’s nuclear doctrine remains unchanged, and that Russia will not resort to preemptive nuclear attacks against any nation or bloc under any circumstances, reserving the right to use its nuclear weapons only as a last resort in the event of an enemy first strike, or in response to large-scale conventional aggression.

A World Without Nukes

Despite Washington’s recent moves to tear up arms control treaties, including the INF, a treaty specifically designed to reduce the danger of nuclear war in Europe, and to deploy dual purpose missile defence components in Eastern Europe, “NATO,” Stoltenberg insists, “seeks a world without nuclear weapons through effective arms control, disarmament and non-proliferation.”

“I welcome Germany’s clear commitment to NATO and our nuclear deterrent,” Stoltenberg noted, adding that the alliance’s nuclear deterrence “remains a vital part of keeping our peace and freedom. It is for the security of the whole alliance, for Germany, its neighbours, friends and Allies, who all have legitimate security concerns and who are all protected by NATO’s nuclear deterrent.” 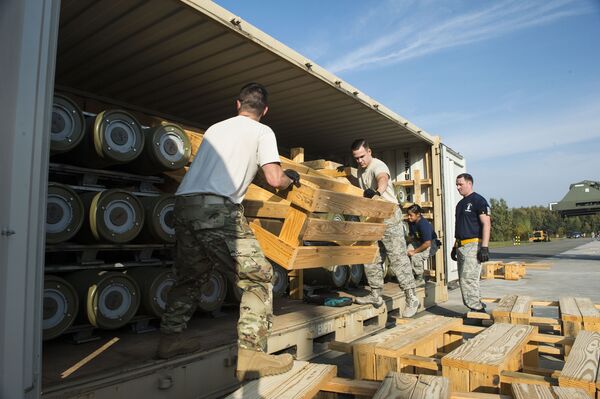 The NATO chief’s comments come amid the ongoing debate in the Bundestag regarding whether the NATO nuclear weapons sharing arrangements, which include the permanent deployment of US bombs on German territory, have outlived their usefulness. Last week, Social Democrats (SPD) leader Rolf Mutzenich argued that Germany should “exclude the stationing of US nuclear weapons in the future.”

“Nuclear weapons on German territory do not heighten our security, just the opposite,” the lawmaker told Der Tagesspiegel. “The time has come for Germany to rule out a future stationing. After all, other countries have done so without questioning NATO,” he said.

Foreign Minister Heiko Maas poured cold water on the idea, saying such “unilateral steps” would only “undermine trust” with the US, and fail to “bring us any closer to the goal of a nuclear weapons-free world.” Annegret Kramp-Karrenbauer, Germany’s defence minister and leader of the ruling Christian Democratic Party, echoed this sentiment, suggesting that “as long as there are nuclear weapons states who don’t want to be part of our community of values, we need a strong negotiating position.” Kramp-Karrenbauer also accused those who want to give up Germany’s nuclear sharing arrangements of “weakening our security.”

The issue of nuclear weapons and the broader geopolitical tensions between NATO and Russia has become a major subject for public debate in Germany in recent years. In late 2019, polling commissioned by the German News Agency showed 55 percent of Germans thought Berlin and other European NATO states should reduce their dependence on the US, with 54 percent of respondents urging an improvement of ties with Russia. 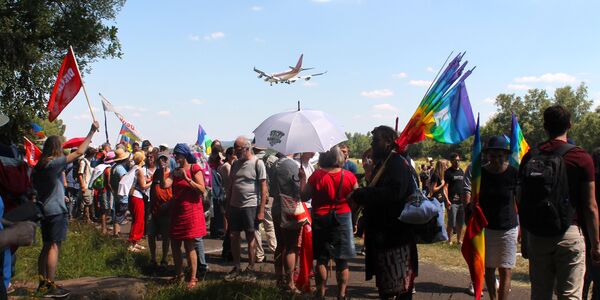 A US military plane comes in for a landing at Ramstein during the protest.
© Sputnik / A. Werner

Germany is one of several Western European nations where the issue of US nuclear weapons has become a matter for political debate. In January, Belgium’s parliament narrowly rejected a resolution demanding the removal of US nuclear weapons from that country, with the Workers Party, Greens, Centrists and Socialists, as well as the francophone DeFI voting in favour of the weapons’ removal while the nationalist Flemish N-VA, Flemish Christian Democrats, Vlaams Belang and Liberals opposed it.