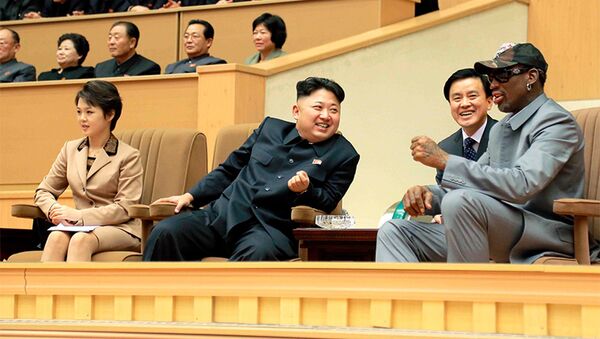 The former NBA star and current media celebrity, who has met Kim Jong-un in person more than once, earlier expressed hope that the speculations about the DPRK leader's medical condition were only rumours.

Addressing continued rumours of Kim Jong-un’s disease and even death, Dennis Rodman says he believes the DPRK leader, whom he has personally met a number of times and even reportedly befriended, is alive and probably watching the widely-anticipated Michael Jordan documentary “The Last Dance.”

Referring to media speculation of a Kim body double at a ribbon-cutting ceremony at a fertiliser plant, Rodman laughed heartily:

“It probably wasn’t much,” Rodman said of his friend’s rumoured health issues.

“I’ve been to dinner with dignitaries there that were reported to be dead here. I don’t believe North Korean news until I hear it from their side,” Rodman said, suggesting that “the fact that they keep to themselves, in many ways, gives the media the ability to run with rumours at times.”

Rodman admitted though he had not spoken to Kim recently. “All I can say, is I hope Kim is safe and sound because there is a lot more work and peace to be done between both nations,” the retired basketball star noted.

Rodman, who has visited North Korea several times, addressed US President Donald Trump in 2019, suggesting that the former should be allowed to step in to improve bilateral diplomatic ties between the countries.

Speaking to TMZ in April, the NBA Hall of Famer expressed hope that the health issues attributed to the North Korean head were rumours only.

Reports and suppositions about Kim’s poor health - unconfirmed by official DPRK source - arose 15 April after Kim failed to attend the anniversary of his grandfather's birthday, a key annual political event in the nation.

On 1 May, Kim Jong-un reportedly appeared in public for the opening ceremony of a new fertiliser plant in Sunchon, purporttedly ending an almost month-long absence that spawned sweeping speculation on his state of health. Many eagerly succumbed to the temptation to chew over a new theory that it wasn't Kim in front of the cameras, but a professional doppelganger.