Palaeontologists Detail Secrets of Earth's 'Most Dangerous Place Ever' 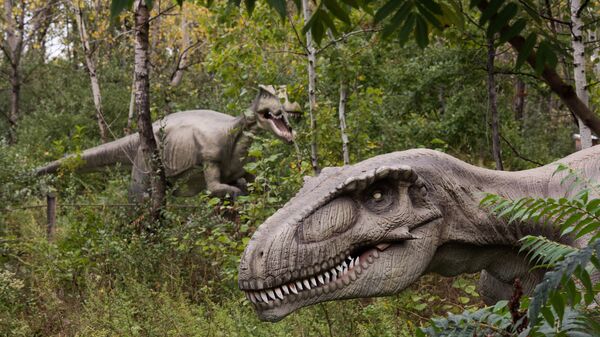 Lilia Dergacheva
All materialsWrite to the author
A fossil-rich deposit near the Moroccan-Algerian border dating back to the Late Cretaceous period has been revealed to have been a place "where a human time-traveller would not last very long,” say researchers, citing a range of uniquely excavated items.

A long-known, but largely understudied part of the Sahara desert, formed of cretaceous rock, has been described as “the most dangerous part of planet Earth” with unique food chains observed in the area, according to a joint study by researchers from a range universities including those of Detroit, Chicago, Montana, Portsmouth, Leicester and the Paris Museum of Natural History.

The abstract, published in the journal ZooKeys, “provides a window into Africa’s Age of Dinosaurs” and how the local theropod population was sustained, according to lead author Dr Nizar Ibrahim, an Assistant Professor of Biology at the University of Detroit Mercy and Visiting Researcher from the University of Portsmouth.

Fossil vertebrates from the area in south-eastern Morocco - the Kem Kem Group - include three of the largest predatory dinosaurs ever known, including the sabre-toothed Carcharodontosaurus - over 8m in length with enormous jaws and 8-inch teeth -  and the Deltadromeus, which was reportedly around 8m long. Interestingly, most Mesozoic formations like this would only feature one to two massive predators, the researchers note.

Separately, the area is revealed to have been home to predatory flying reptiles - so-called pterosaurs -  and crocodile-like hunters.

“This was arguably the most dangerous place in the history of planet Earth, a place where a human time-traveller would not last very long,” Dr Ibrahim vividly explained.

The fossil record concurrently features not equally diverse large-bodied herbivores, the team admits, although the latter likely did dwell alongside the colossal carnivores, but are "not as diverse as in many other cretaceous formations nor particularly common as fossils”.

At the time these dinosaurs lived, roughly 100 or even 115 million (at least, some species) years ago, the cretaceous rock housed a grand river system, and the fish and other marine animals inhabiting it would have been sufficient to feed the gigantic theropods.

"This place was filled with absolutely enormous fish, including giant coelacanths and lungfish," palaeobiologist David Martill from the University of Portsmouth in the UK said, describing one of them as “an enormous freshwater saw shark called Onchopristis with the most fearsome of rostral teeth, they are like barbed dagger.”

The site's existence has long been known, and not only to academics, but also to privately operating fossil hunters, so that the plundered remains of many of the said dinosaurs, reptiles, and other creatures have long ended up in private collections.

The fact that the fossils are widely scattered means that scientists have hitherto been missing a balanced overview of what exactly has been found on the edge of the Sahara desert.

"This is the most comprehensive piece of work on fossil vertebrates from the Sahara in almost a century, since the famous German palaeontologist Ernst Freiherr Stromer von Reichenbach published his last major work in 1936," Martill explains.