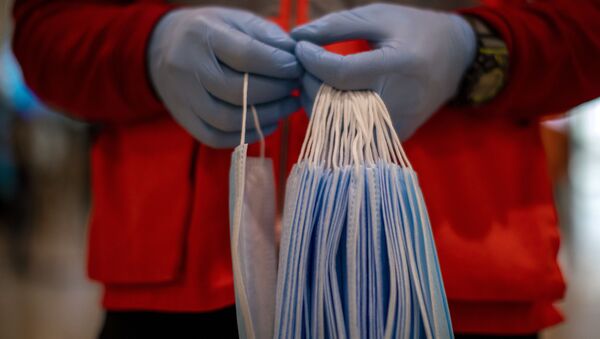 © AP Photo / Emilio Morenatti
Subscribe
Like a number of other countries, Tunisia is preparing to gradually lift the quarantine starting from 4 May, but in order to do so, it will be necessary to equip all citizens with protective face masks.

As Tunisia is preparing to ease its coronavirus lockdown restrictions, the authorities decided to entrust the production of 30 million non-medical masks to local textile factories in order to provide all citizens with protective gear.

But several things went wrong. First, the information that was supposed to remain confidential, regarding the production criteria for these masks, came to light. Even before the official publication of the specifics, manufacturers purchased all the available materials used for sewing masks.

Then a company owned by a member of Tunisian parliament was ordered to produce two million masks, although the law prohibits parliamentarians from having commercial relations with the state.

The two linked cases have sparked a major scandal in the African country: a government commission was sent to the Ministry of Industry in order to investigate both cases; and the Ministry of Justice also expressed interest in them.

It all started when the National Anti-Corruption Authority (INLUCC), an independent body, received several signals regarding a major shortage of fabric and raw materials needed to produce face masks.

"After receiving these alerts, we started to investigate by listening to the various parties involved in this case. During the investigation, we realized that there was a parallel case regarding the order entrusted by the Minister of Industry directly to a company owned by a member of parliament, which is in flagrant violation of the law," Fawzi Chemingui, INLUCC member, said.

It turned out that on 7 April, Minister of Industry Salah Ben Youssef called Jalel Zayati, the owner of OrthoTunisia, one of the largest orthopaedic factories, and ordered 2 million masks at a total cost of 4 million dinars (approximately $1.4 million). And this order is not related to the 30 million masks that the authorities want to purchase.

The minister specified the necessary characteristics and the purchase price even before all these details were published – the specifications were made public on 11 April. This allowed the manufacturer to get supplies and buy all the fabric for mask production available on the market.

“Even if the operation was carried out by mutual agreement, without any tender, given the exceptional circumstances in the country due to the crisis, there was no compliance with the current legislation in the field of state tenders,” Fawzi Chemingui said.

In addition, he doesn’t understand why the order was entrusted to a single manufacturer, “although there are at least five more factories in the country that are engaged in the same activity and have the same production facilities.”

Deputy Who Wanted to Sell Masks to the State

What shocked the public the most in this case is that Jalel Zayati is a deputy, and, therefore, has no legal right to have commercial relations with the state, as is specified in article 25 of the Tunisian parliament’s internal regulation and article 20 of the law 2018-46 on declaring property and interests, the fight against illicit enrichment and conflict of interest in the public sector. The deputy is also a member of the parliamentary commission on industry and the deputy rapporteur of the commission on public administration and the fight against corruption.

Jalel Zayati doesn’t deny the facts but believes that there is no “conflict of interest, given that the country is at war, so there was no time to organize a tender,” as he said on Radio Mosaïque.

For his part, Minister of Industry Salah Ben Youssef explained his actions at a press conference on 17 April: “This factory has experience exporting products to European markets. Therefore, we can trust it in terms of product quality and compliance with standards,” the minister said.

The minister explained that he hadn’t been aware that Zayati was a deputy:

“I learned that he was a deputy only when I was in parliament two days ago,” the Businessnews website reported, citing the Minister.

“It’s the Tunisian Federation of Textiles and Clothing (FTTH) [of which Jalal Zayati is Vice President] that proposed his manufacturer to the Minister. I, therefore, reminded him [the Minister] that Zayati was an MP and a member of our committee. He didn’t seem to know about that,” Abir Moussi said.

Abir Moussi, who questions the results of the Anti-Corruption Commission session – of which nothing is known – said she wants to take all the necessary measures regarding this affair.

"I proposed to send a letter to the parliamentary bloc which he is a member of, asking them to replace him in the committee because, in my opinion, he cannot remain a committee member. My proposal will be put to the vote at our meeting next Wednesday," she said.

Meanwhile, MP Jalel Zayati said that he no longer wanted to deal with the state and that in any case, he had never received either an order-warrant or any other written document. As for the masks already produced, he said he wanted to sell them in Europe at a higher price. Recall that the price set by the government is 2.040 dinars ($0.70) apiece.

India’s First Lady Stitches Face Masks for Needy
Talking to Tunisian Television and to the private channel Hannibal TV on 19 April, Head of government Elyes Fakhfakh defended the Minister of Industry’s choice, saying that “there had been no proven embezzlement in the masks case, especially since the country is in a state of war on the virus,” the Leaders website reported, citing the Prime Minister.

So far, Tunisia, which is under a lockdown until 4 May, has confirmed 949 cases of coronavirus, 38 deaths, and 216 recoveries.