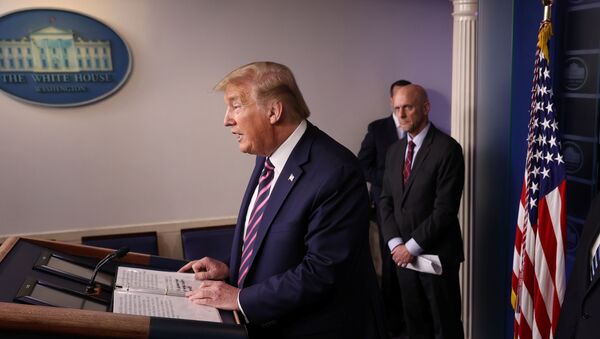 Earlier, US President Donald Trump cut funding for the World Health Organization, accusing the agency of "being China-biased" and claiming that "thousands of lives could be saved, had the WHO done its job".

The two leaders expressed hopes to convene the five permanent members of the UN Security Council soon to discuss a response to the coronavirus pandemic. Trump and Macron also talked about "critical regional and bilateral issues", Deer noted.

The men discussed "positive developments in combating the coronavirus pandemic and progress toward reopening world economies".

The two leaders expressed hope to convene the P5 soon and discuss the UN response to the pandemic. President Trump and President Macron agreed on the need to reform the World Health Organization. The two leaders also discussed critical regional and bilateral issues.

Earlier in April, Trump ordered a halt to US financing for the World Health Organization, holding the agency responsible for thousands of deaths from the COVID-19 outbreak. Trump stated he wanted "full accountability" for what he characterized as the organization's failings, noting that "maybe they'll reform, maybe they won't".

US Secretary of State Mike Pompeo claimed on 23 April that Washington may never restore funding to the institution, mulling the possibility of setting up an alternative to the intergovernmental UN body, claiming that a "structural fix of the WHO" is needed.

Following the finance cut, WHO chief Tedros Adhanom Ghebreyesus said that he regretted Trump's decision to withdraw the money and expressed hope that the United States would continue to partner with the agency in the future.