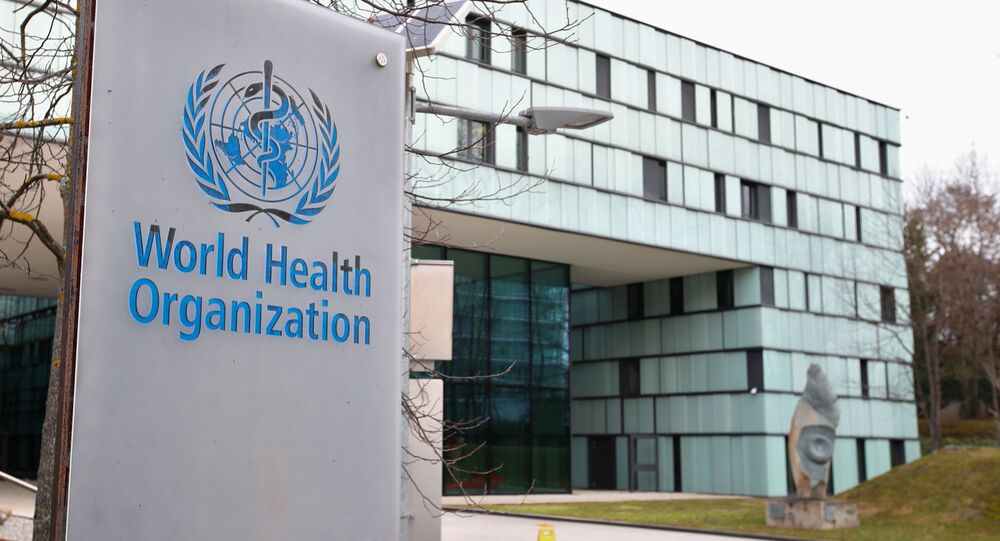 Previously, Donald Trump accused the organisation of being "China-centred" and allegedly siding with Beijing by misreporting the actual information about the coronavirus pandemic.

The World Health Organisation's (WHO) chief, Tedros Adhanom Ghebreyesus, has said that he regrets US President Donald Trump's decision to withhold the country's funding for the WHO. The head of the global health body also stressed that the WHO and the US have long been partners and expressed hope that this would be the case in the future.

"The United States of America has been a long-standing and generous friend to WHO and we hope it will continue to be so. We regret the decision of the president of the United States to order a hold on funding to the World Health Organization", Tedros Adhanom Ghebreyesus said.

The WHO chief went on to say that the organisation would be assessing the losses from Trump's decision and would "try to fill any gaps" by discussing them with its remaining partners. Tedros Adhanom Ghebreyesus also reiterated a sentiment earlier expressed by many countries in the wake of the US move that Washington had chosen a bad time to withdraw its support for the WHO as the world is struggling to stop the COVID-19 pandemic.

© REUTERS / Denis Balibouse
Director General of the World Health Organization (WHO) Tedros Adhanom Ghebreyesus attends a news conference on the situation of the coronavirus (COVID-2019), in Geneva, Switzerland, February 28, 2020

Earlier, in light of Trump's decision to suspend funding for the organisation, WHO's envoy on the COVID-19 pandemic, David Nabarro, called for focus on fighting the outbreak right now and to "leave the recriminations till later". He also pointed out that any actions in regard to the WHO affect not just the acting party, but the entire world.

Global Reaction to US Withholding WHO Funding

China, the country Trump claimed the WHO had conspired with to conceal the truth about COVID-19 at the early stages of the outbreak, harshly criticised the US president's move. Chinese Foreign Ministry spokesman Zhao Lijian called on the US to return to fulfilling its international obligations, noting that the withdrawal of support for the WHO would affect the entire world as the pandemic rages on across the globe. Zhao Lijian said that his country would "look into" covering the US share of the funding, but made no promises in that regard.

"At a time like this when we need to be sharing information and we need to have advice we can rely on, the WHO has provided that. We will continue to support it and continue to make our contributions", Ardern said.

EU foreign policy chief Josep Borrell said the bloc deeply regrets the US decision, noting its bad timing in light of the coronavirus pandemic. His German colleague, Foreign Minister Heiko Maas, slammed the US decision, saying that "apportioning blame doesn't help" to fight the virus, which "knows no borders".

"We have to work closely together against Covid-19. One of the best investments is to strengthen the UN, especially the under-funded WHO", Maas added.

Russian Deputy Foreign Minister Sergei Ryabkov's criticism of Washington's actions was even harsher, as the official called Trump's decision to defund the WHO not just "very alarming", but outright "selfish".

"Such a blow to this organisation at a time when the eyes of the world community are in many ways looking precisely to it is a step worthy of condemnation and censure", he said.

Iran, which has been struggling to stop the pandemic and treat its citizens amid medicine shortages caused by American sanctions, stated that the rest of the world will soon learn what the Islamic Republic learnt a long time ago.

However, Trump's view of the WHO's actions and the organisation's effectiveness at fighting the virus found partial support in Australian Prime Minister Scott Morrison, who blasted the global health body for its “unfathomable” support of China and its policies in regards to the pandemic. At the same time, even Morrison acknowledged that the WHO was of certain help to the countries in the Pacific region, adding that Australia works "closely" with the organisation.

Kremlin on US Suspension of WHO Funding: G20 Supports WHO's Coronavirus Response

Size Matters: Between Ronaldo and Messi, Who Has the Biggest….Telly?