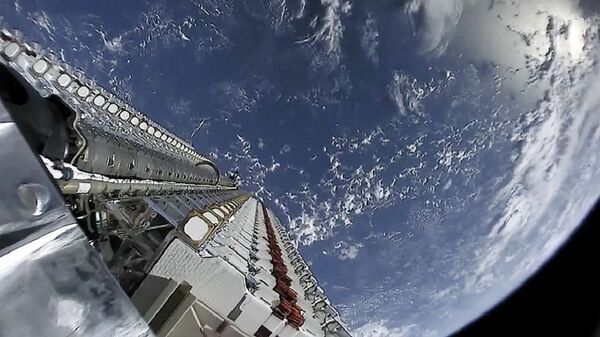 UFO hunters claim they have spotted a cigar-shaped object on the SpaceX Starlink live feed, featuring the launch of a new batch of 60 globe-spanning satellites into orbit from NASA's Kennedy Space Centre in Florida on 19 March.

The mysterious object is said to have popped up near the rocket, Falcon 9, soon after the deployment of the satellites, raising multiple conspiracy theories as SpaceX is believed to have abruptly cut the live stream seconds after it came into view.

Alien enthusiast David, founder the YouTube channel UFOmania, opted to share a slow-motion clip for subscribers to get a better view of what happened when Michael Andrews, SpaceX's supply chain supervisor, summed up the launch.

"It seems like that object whatever it is turned off its cloaking device allowing itself to be visible. Very interesting", one baffled user wrote, with another wading in:

“No idea what's going on here though, if it is a UFO, possibly showing an interest in all the activity going on with satellite launches".

“It probably just partially lowered its cloaking device to get a better look at that crappy toy the Earthlings sent up", another continued.

"Let's hope the video doesn't get deleted!”, one viewer posted.

Another, meanwhile, paid special attention to the operator allegedly forgetting to censor the recorded livestream:

"Thats a huge Cigar stick shaped Alien Craft or UFO. Spacex forgot to cut live public feed", he commented, while another brought up the finally released “edited out” feed:

“SpaceX just officially posted the whole launch event, but there is literally nothing at 16:14 launch time, as y'all saw in this clip, I think they edited out that part of the launch and showed nothing really happened, Just put both the clip side by side, y'all see the difference, something is going on up there!”, the user exclaimed.

The rest opined it could be anything from an asteroid, or the first stage of the rocket launch to a common weather balloon emerging in front of the camera lens.

Starlink is a satellite constellation consisting of thousands of mass-produced minuscule devices constructed by SpaceX to provide satellite internet access in Earth’s low orbit that will be connected to ground transceivers.