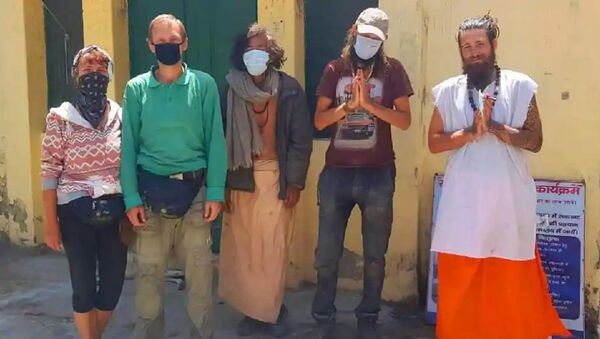 New Delhi (Sputnik): India is under its second phase of lockdown, which has brought the country to a standstill. The government has suspended all travel services and extended all visitor visas until 3 May.

Six foreigners, including two women and an American, were found hiding inside a cave for more almost a month in India's Uttarakhand state, a police official said on Thursday.

According to the police, the group of six foreigners - two from Ukraine, one from the US, Turkey France and Nepal, were found following a tip off from locals last Saturday.

"After a team reached the caves, they found the foreign nationals living there with all their belongings. During investigation, they revealed that they shifted to the nearby caves on 24 March after they ran out of money to pay the hotel bills in Rishikesh city", said R.S. Kataith, a police officer at Lakshman Jhula Police Station, Rishikesh city in Uttarakhand state.

The US national has been identified as Michael Falcone. He came to India in November while the other five had come to the city of Rishikesh around two months ago, the official added.

"After carrying out their medical test, all of them have been shifted to a quarantine centre for 14 days. None of them showed any symptoms of coronavirus", Kataith added.

Rishikesh is a Hindu pilgrim centre and a favourite tourist place for foreigner travellers. The famous band the Beatles stayed here in 1968 while writing their White Album.

According to the Indian Health Ministry, the country has witnessed as many as 21,393 cases of COVID-19 and 681 people have lost their lives due to the virus, while 4,258 patients have recovered from the disease so far.