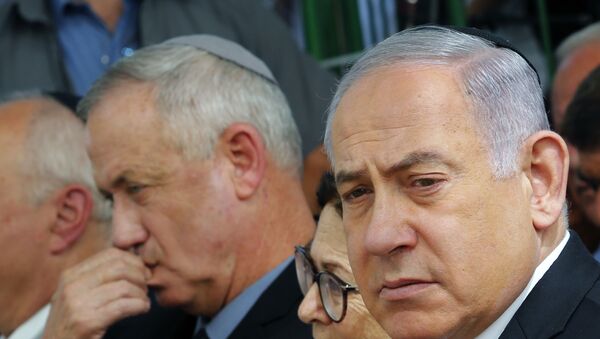 Tim Korso
All materials
After three elections in a year Israeli political forces still can't reach a consensus to form a new government with none of the nation's political parties and existing alliances able to gain a majority in the country's parliament, the Knesset.

Early on 16 Apriil, Israeli President Reuven Rivlin announced that he had tasked Knesset members with picking a new head of government. He expressed hope that a political majority emerges in the legislative body to make the choice soon and thus prevent the country from heading to a fourth general election in less than two years.

This morning, I informed the Speaker of the Knesset that I am entrusting the Knesset with the task of forming a government, according to Article 10(a) of Basic Law: The Government (2001). I hope majority of MKs can be found as soon as possible. preventing a 4th round of elections

Rivlin made his announcement the day after the mandate to form the government, which he gave to the head of the Blue and White Alliance Benny Gantz, expired after a 48-hour extension. Gantz used the extension for a last-ditch effort to strike an agreement to form a unity government with Benjamin Netanyahu and his party Likud.

The sides conducted talks for 11 straight hours on 15 April, but failed to overcome their disagreements with the appointment of judiciary officials being the last stumbling block on their path to the deal. The sides continuing talking even though Gantz's mandate has expired.

Likud and Blue and White Alliance held talks in the wake of previous elections as well, but Gantz ruled out the possibility of a unity government with Netanyahu as the prime minister citing the criminal indictments against him. The head of the Blue and White Alliance walked back his position after the latest election citing the need to form a government to address the issue of the ongoing coronavirus pandemic.

The current roadblock in Likud and the Blue and White Alliance's talks concerning the appointment of judiciary officials comes as caretaker Prime Minister Netanyahu continues to face criminal charges for bribery, fraud, and breach of trust in three separate cases. He is suspected of receiving valuable gifts and trying to broker favourable coverage in the Israeli media in exchange for political favours. The prime minister denies the accusations against him and has even called the charges a coup attempt.