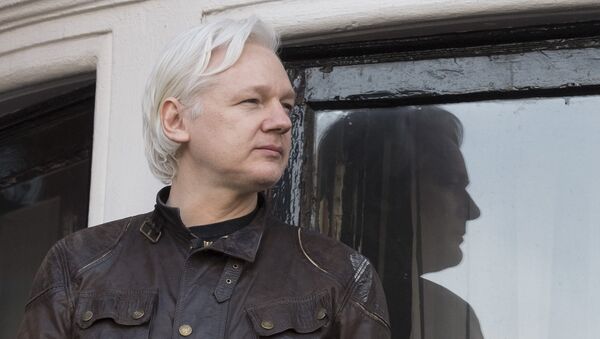 Lourdes Gomez
London (Sputnik) - The systematic espionage practised against Julian Assange at the Ecuadorian embassy in London, including eavesdropping and surveillance of the South American country's diplomats and officials, allowed the US to disrupt a confidential operation to extract the WikiLeaks founder from the UK on 25 December 2017.

The National Intelligence Secretariat of Ecuador (SENAIN) entrusted the security of the Embassy of Ecuador in London to retired Spanish military man David Morales Guillen and his company Undercover Global (UC Global).

However, in the 18 or 20 months before the termination of the contract in the summer of 2018, no one was able to avoid the hidden cameras and microphones secretly installed in the Assange hideout in the Knightsbridge district, according to a lawsuit filed in Madrid by the Australian, as he was already in prison fighting against extradition to the United States.

“In those years, the defendants created a kind of 'Big Brother' that monitored all movements of Mr Assange and people close to him”, noted the criminal case pending before Spain’s High Court.

Even the then-head of SENAIN, Rommy Vallejo, was recorded on the server and the database on the activities of the “Hotel” (Embassy) and the visits of the “Guest” (Assange) that Morales made available to his “American client”, as follows from the testimony to the judge.

Vallejo visited Assange on 21 December 2017 when “the possibility was being explored” of taking him out of the country with an Ecuadorian diplomatic passport and therefore under the protection of “the immunity and inviolability of the 1961 Vienna Convention”, Aitor Martinez, a lawyer with the international team defending the cyber-activist, told Sputnik.

“The operation was designed by six or seven people at most. Julian was paranoid because he suspected the company was spying on him. He'd take me to the bathroom, open the faucet, and there we'd talk. None of us believed him, but he was absolutely right”, the Spanish lawyer said.

Vallejo was supposed to execute the last stage of the plan, coordinate the exit from the building and transfer Assange to the “third state”. The plan was ultimately thwarted due to an alleged leak by the owner of UC Global to his contacts in Las Vegas Sands, the casino empire owned by Sheldon Adelson, a tycoon who sponsored Donald Trump's presidential campaign who was close to Mike Pompeo and a regular Republican Party donor.

“Rommy Vallejo, head of SENAIN, was to make the last step. He visited Julian to clarify how he was going to leave the embassy, where he would be seated in a diplomatic car, whether they would conduct a preliminary rehearsal with some diplomat...These were all questions about the details of the exit operation that was to take place on 25 December”, Martinez recalled.

Bolivia, Greece, Serbia, Belgium, China or Venezuela was considered among the possible endpoints of the Australian journalist's planned escape from the United Kingdom.

“We urgently looked for a country that would accept him and there were many options, but Russia was not among them. Julian did not want to go to Russia because it would fuel the conspiracy theory that he was a Russian agent”, he said.

That very night on 21 December, David Morales received a detailed report of Vallejo's visit to the Ecuadorian embassy and a link to the audio-visual recordings of the day, which he “insistently” requested from his operatives in e-mails now included in the lawsuit.

The next day, the United States sent an international arrest warrant to London for the former director of WikiLeaks. For his part, the US ambassador in Quito made clear that he was against the plan prepared by a handful of people, as evidenced by the case documents to which Sputnik received access.

“It makes no sense for a contractor to spy on whoever hires him... it proves that the spy services were provided for US intelligence or its intermediaries in Las Vegas Sands”, the criminal lawsuit against Morales and UC Global argued.

The Madrid Court’s investigation reveals a crucial focus of the British extradition process launched by the United States as soon as Assange was arrested at the Ecuadorian mission a year ago.

Former UC Global employees are willing to testify by video conference if the Westminster Magistrates’ Court guarantees to protect their identities at a level similar to that which they enjoy in Spain.

These are three protected witnesses who gave Judge José de la Mata secured backups of the company’s computers, e-mails and other evidence of a clear and gross violation of Assange’s privacy, along with intercepted conversations about his legitimate possible actions against the United States or about his health status and other sensitive subjects.

Videos Filmed by Spanish Firm in Ecuadorian Embassy Reveal Extent of Surveilance of Assange
Martinez believes that it is “inconceivable that British justice” continues to deny his client conditional release amidst the coronavirus pandemic and maintains the schedule of public hearings to be resumed on 18 May.

“They have Julian fully isolated in a cell for 23 and a half hours; he can't prepare any legal proceedings because his lawyers can't visit him. What is his right to judicial protection? It is complete nonsense!”

The lawyer believes that “Morales is completely caught” and that the records made at the embassy will bring “surprises” during the extradition hearing against the founder of the first high-profile leak site. (Sputnik)