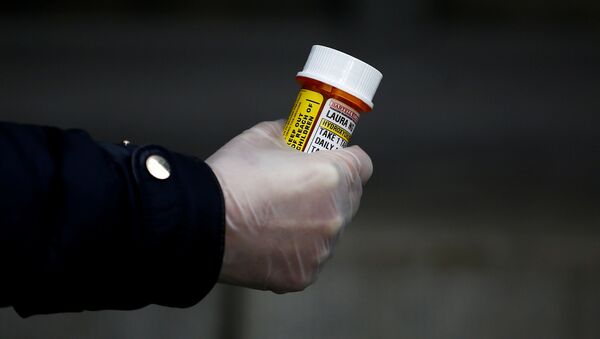 As US President Donald Trump continues to tout the effectiveness of hydroxychloroquine in treating the COVID-19 novel coronavirus, the Central Intelligence Agency (CIA) is stressing to its employees that the antimalarial drug may have deadly side effects.

The Washington Post reported Monday that the CIA employee website on COVID-19 featured a Q&A section which pushed back against using a combination of hydroxychloroquine and the antibiotic azithromycin to treat the novel coronavirus without the approval of a doctor.

“At this point, the drug is not recommended to be used by patients except by medical professionals prescribing it as part of ongoing investigational studies,” read the agency's response to a question posed about obtaining hydroxychloroquine without a prescription in hopes of fighting COVID-19.

“There are potentially significant side effects, including sudden cardiac death, associated with hydroxychloroquine and its individual use in patients need to be carefully selected and monitored by a health care professional.”

The answer concluded with a plea to the employee, asking them, “Please do not obtain this medication on your own.”

Speaking to The Hill, a CIA spokesperson expressed that the information that is provided to the agency’s workforce has and will be consistent with that of the US Centers for Disease Control and Prevention (CDC) and White House guidance.

The question appeared on the CIA website not long after Trump began touting hydroxychloroquine as a possible “gift from God” and “a big game changer” in combating the novel coronavirus in the US, which currently has more than 598,000 confirmed COVID-19 cases and has suffered at least 25,239 related deaths from the disease. Some 44,364 patients in the US have recovered.

HYDROXYCHLOROQUINE & AZITHROMYCIN, taken together, have a real chance to be one of the biggest game changers in the history of medicine. The FDA has moved mountains - Thank You! Hopefully they will BOTH (H works better with A, International Journal of Antimicrobial Agents).....

Since late March, Trump has continued to reference the so-called miracle drug, despite criticism from those ranging from political rivals to medical officials familiar with the antimalarial drug. Continuing his campaign in favor of hydroxychloroquine, the US president met with individuals who recovered from the novel coronavirus earlier this month, including Michigan Democratic state Rep. Karen Whitsett.

The lawmaker, who tested positive for COVID-19 in March, began taking prescribed doses of hydroxychloroquine on March 31 after exploring treatment options with her husband for several days, reported the Detroit Free Press.

Democrat state representative who recovered from #Coronavirus using Hydroxychloroquine thanks President @realDonaldTrump: Had you not brought it up, "I wouldn't even be here today." pic.twitter.com/2bwpGS65qG

Whitsett thanked Trump for spreading the word about the drug and contended that she would not be able to advocate for those in Detroit, Michigan, if it were not for him igniting a conversation around hydroxychloroquine use in COVID-19 treatment.

South Dakota Governor Kristi Noem announced Monday via a televised news briefing that the Mount Rushmore State would be the first in the US to hold state-wide trials on hydroxychloroquine.

"Every South Dakotan who has COVID-19 can have that conversation with their physician," Noem said. "Am I a candidate, am I a good option to receive hydroxychloroquine?"

She added that the South Dakotan government can treat up to 100,000 infected individuals in the state because the “federal government has stepped up” and given them “everything [they] need.”

The CDC website notes that both hydroxychloroquine and chloroquine are currently under investigation in a number of clinical trials to test their effectiveness in treating “mild, moderate, and severe COVID-19.” The health agency stresses that a prescription is required for the oral drugs.