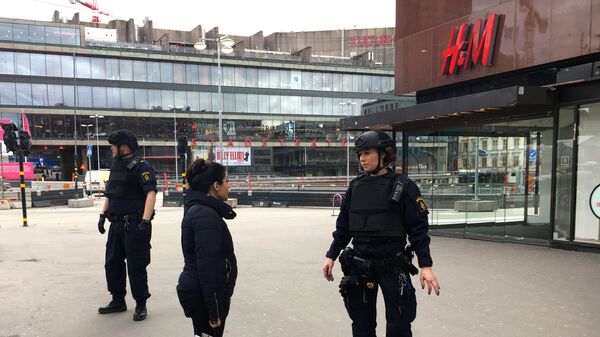 So far, over 130 coronavirus-related incidents have been reported by police personnel, and, according to a police spokesman, there is a general concern within the entire police force.

Sweden's national broadcaster SVT has reported a spate of incidents involving people purportedly sick with the coronavirus intentionallly cough and spit on police. According to SVT, employees in healthcare, the national liquor-store monopoly Systembolaget, and postal workers have also been affected.

“There have been a few examples of that. They pretend to be infected, run against the police and cough or spit”, Patrik Danielsson of the National Police Association told SVT.

So far, more than 130 coronavirus-related incidents have been reported by police personnel, and, according to Danielsson, there is a general concern within the entire police force.

Danielsson explained that the tactic is employed by people who try escape arrest or avoid dealing with the police altogether. Similar tactics were used before, but have gained momentum as the coronavirus spreads, he said.

“We must always assume that the people are infected, all police officers must reckon with it in everyday life. We can't stop doing our job, but we have to manage the situation based on it”, Danielsson explained.

So far, the Swedish Work Environment Authority has received over 60 accident reports linked to the coronavirus. Most refer to medical care and elderly care, but examples of incidents are also found within the police, at Systembolaget, and postal operations, SVT reported.

In neighbouring Norway, a man was given a prison sentence for spitting on police officers and threatening the coronavirus.

In Sweden, a prankster duo who coughed at people while pretending to have the coronavirus landed in the limelight at the end of March. The prank video published by the YouTube account Alpha & Ali sparked negative reactions and was even condemned by local police.

“If you are acting stupid to be funny at someone else's expense, we want to ask these people to stop immediately”, police spokeswoman Åsa Willsund told the newspaper Eskilstunakuriren.

Swedish Scientists Predict 'Tragedy', 'Unnecessary Deaths' as COVID-19 Triage Starts
The clip was later taken down, and the authors, a migrant duo, claimed to have been threatened and subjected to racism.

Sweden, which has taken a standalone approach to combating the coronavirus epidemic and consistently avoided lockdowns, instead relying on voluntary self-isolation and social distancing measures, has seen at least 10,483 confirmed cases and 899 fatalities. Migrants from blighted suburbs and the elderly were earlier highlighed as the most vulnerable and hardest-hit groups.