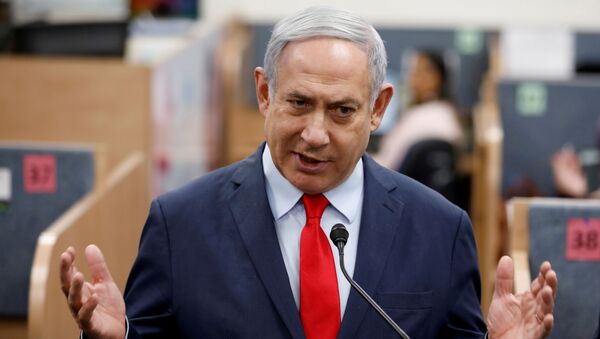 Israeli Prime Minister Netanyahu's decision comes just a day after US President Donald Trump issued a decree that the US would place sanctions on countries that are denying or "unreasonably delaying" the acceptance of their citizens traveling from the US.

Israeli Prime Minister Benjamin Netanyahu ordered the suspension of all flights "from the US and other commercial flights" to Israel until all travelers arriving into the country are able to be taken to state-run quarantine hotels for a 14-day period by the Home Front Command.

According to a statement by the prime minister's office on Saturday, cited by The Times of Israel, flights already destined for Israel will be permitted to land but no new flights will be allowed until a solution has been arranged.

"Prime Minister Benjamin Netanyahu contacted Minister of Transport Bezalel Smutrich, and decided to halt the flight from the US and other commercial flights until a Cabinet meeting can be held to determine all persons returning from abroad be quarantined at designated hotels under responsibility of the Ministry of Defence", the official government statement reads.

PM Netanyahu contacted Transportation Minister Smotrich; decided to halt flight from the US and additional commercial flights until a Cabinet meeting can be held to determine all persons returning from abroad be quarantined at designated hotels under responsibility of @MoDIsrael.

The move follows a case where a United Airlines flight from New York arrived at Ben Gurion airport on Saturday morning despite the lockdown.

Around 80 passengers on the flight were allowed to leave the airport without precautionary temperatures checks or questions on their state of health and where they have been, mandatory procedure for all arrivals, according to The Times of Israel.

Only seven passengers from the New York flight were transferred to state-run quarantine hotels in line with an order by Netanyahu last week.

“The continued arrival of flights from New York and failure to transfer passengers to [specially designated] hotels is negligent", a Health Ministry official said on Saturday, cited by The Times of Israel.

While the Health Ministry has said that it would prefer all passengers to be taken to quarantine hotels, those who could prove they could self-isolate have been permitted to leave on their own due to "legal and procedural complications, as cited by the Defense Ministry, in forcibly quarantining those who can independently self-isolate.

Netanyahu's decision follows US President Donald Trump's decree that the US would impose sanctions against countries that deny or are "unreasonably delaying" the acceptance of their citizens traveling from the US.

"Countries that deny or unreasonably delay the acceptance of their citizens, subjects, nationals, or residents from the United States during the ongoing pandemic caused by SARS-CoV-2 create unacceptable public health risks for Americans. The United States must be able to effectuate the repatriation of foreign nationals who violate the laws of the United States," Trump said in a memorandum on Friday evening

Trump has stated that he is a close ally of the current Israeli leadership, although his order gives the Secretary of State the ability to impose sanctions on countries restricting travel from the US and remove them if efforts are made to permit citizens entry.

According to data from the Corona National Information and Knowledge Centre around one third of COVID-19 infections in Israel are with those who have returned from abroad, with many cases in particular originating from New York, The Times of Israel reported.

Countries across the world have implemented travel restrictions to slow the spread of the coronavirus pandemic.