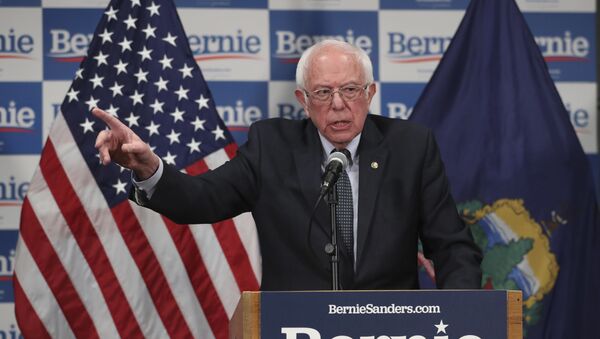 The Vermont senator is the latest presidential hopeful from the initial 29 candidates to step down from the Democratic campaign, leaving Joe Biden as the only candidate from the party to stand in the election.

US Senator Bernie Sanders has quit the Democratic presidential race, his campaign revealed on Wednesday. The politician announced his decision to withdraw from the race in a conference call with his staff and is now planning to address his supporters via a livestream at 11:45 ET.

Shortly after Bernie's decision was announced, Joe Biden took to Twitter to issue a statement on his withdrawal. The Delaware politician said that Sanders is "one of the most powerful voices for change in our country".

Biden went on to say that Bernie had made a difference in American politics by creating a powerful movement.

"He hasn’t just run a political campaign; he’s created a movement. And make no mistake about it, I believe it’s a movement that is as powerful today as it was yesterday. That’s a good thing for our nation and our future", the former vice president wrote in his post.

Trump Speaks Up on Bernie's Decision​

Meanwhile, President Trump reacted to the news of Sanders' withdrawal, noting that the senator would have prevailed in almost every state on Super Tuesday, "if it wasn't for Elizabeth Warren".

Sanders' pull-out from the race comes just a day after the 2020 Wisconsin Democratic primary, where his rival Biden is likely to come out ahead of the Vermont senator, according to several pollsters.

Despite the initial successes, Sanders has won nine contests and attracted 31.03% of the popular vote, ceding the lead to the former vice president, who has prevailed in 19 contests.

78-year-old Sanders, born in Brooklyn, New York, has had a long political record. He has served as a United States senator for Vermont since 3 January, 2007 and was the US representative for Vermont's at-large congressional district from 1991 to 2007.

He attempted to run for the presidency in the 2016 Democratic nomination against Hillary Clinton, but was defeated by the former secretary of state.

He announced his second presidential bid in February 2019, running as an independent candidate.

His platform includes abolition of the death penalty, raising taxes on the wealthy, increasing the federal minimum wage, and pushing for Medicare for All. He is also calling for slashing the defence budget, rejecting additional funding for the wall on the Mexican border, and is also a proponent of legalising marijuana.

Sanders prevailed in seven states in the Democratic primaries and caucuses, including New Hampshire, Nevada, California, Colorado, Utah, Vermont, and North Dakota. He was also supported by Democrats abroad, and won in the Northern Mariana Islands.