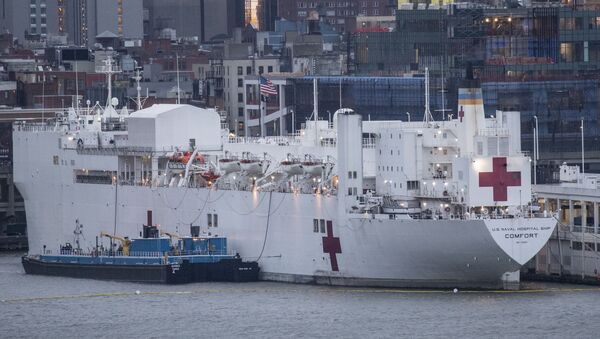 US President Donald Trump announced on Monday that the hospital ship USNS Comfort, presently moored in New York Harbor, would be opened to patients with COVID-19. The ship was originally sent to the area to treat other cases.

"We hadn’t had that in mind before," Trump said at a Monday press conference at the White House. He indicated he was bowing to pressure from New York Governor Andrew Cuomo in particular, whose state is grappling with the epicenter of the COVID-19 outbreak in the United States, with more than 131,000 cases and more than 3,000 deaths.

Trump said on Sunday that he was considering opening the Comfort to COVID-19 patients amid heavy criticism for the ship having just a handful patients while hospitals ashore buckle under an overflow of patients. The huge hospital ship reportedly has 1,000 hospital beds.

The Comfort was originally sent to New York to treat cases other than those with COVID-19 in order to take pressure off city hospitals and enable them to specialize in treating the novel coronavirus. Her sister ship, the USNS Mercy, was sent to Los Angeles, California, for the same purpose.

Trump also indicated that his administration had reached an "amicable" agreement with 3M, a company that makes surgical masks, following his invocation of the Defense Production Act, a wartime law designed to give the president the power to direct industrial activity in the country. Trump used the law to stop 3M from exporting scarce medical products to other countries during the crisis, which the company protested.

"The 3M saga ends very happily," Trump said. "We're very proud to be dealing now with 3M." He told reporters the deal included the delivery of 55.5 million "high-quality face masks each month" for the next three months. It is unclear if these include the N95 mask that is proven the most effective against the coronavirus.

The president told reporters that 1.79 million Americans had been tested for COVID-19 thus far, noting this would only continue to increase as new high-speed tests are rolled out.

Trump Will 'Get Involved' in Navy Captain Firing

When asked about comments made Sunday by acting US Navy Secretary Thomas Modly about how the now-removed captain of the USS Theodore Roosevelt was "too naive or too stupid" to be in command, Trump said he thought the captain's actions were a mistake, but he would investigate.

"Letters should not have been sent to many people unclassified," he told reporters. Last week, Captain Brett Crozier sent a strongly worded letter to US Navy leaders urging help containing a COVID-19 outbreak on the huge warship, but that letter was leaked to the press and published, sparking a national controversy.

"That was a mistake," Trump told reporters. "It shows weakness, and we are not weak."

"I'm going to get involved and see exactly what's going on there," Trump said. "I don't want to destroy somebody for having a bad day."