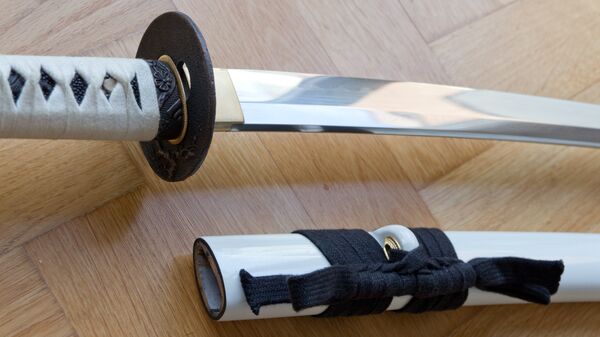 Ilya Tsukanov
All materialsWrite to the author
Amid the coronavirus pandemic, Spain has resorted to some of the toughest lockdown measures in the world to try to slow the spread of the virus.

Spain’s national police have released dramatic footage of a man armed with a pair of meter-long katana swords engaging in a standoff with cops in Madrid.

The video shows the man, stripped to his waist and carrying two large swords, walking through the streets, screaming obscenities at police and local residents, claiming to be infected with the coronavirus, and yelling “Yo soy Dios!” (I am God)” and “I’m going to kill you.”

Police could be seen trying to reason with the man, moving back as he approached and firing warning shots into the air. As time passed, more and more officers arrived, some equipped with automatic rifles, with the man refusing to surrender.

Eventually, a police van arrived and proceeded to ram the man as he flailed the swords at its windshield, smashing it. He was then pinned by a second vehicle, desperately hacking at both vehicles before being taken down as over a dozen officers swarmed the area.

Police say the man has been arrested and remains unharmed.

Spain has seen some of the toughest COVID-19-related restrictions in the world, with people confined to their homes for three straight weeks now. Although the majority of the public has obeyed the strict quarantine rules, police have been deployed in force against violators, issuing over 270,000 fines and arresting over 2,300 people.

On Saturday, the Spanish government extended the lockdown, which was supposed to end on April 11, until at least April 26. Spanish health minister Salvador Illa said Thursday that he believed Spain may have reached the peak of the virus and entered a “slowdown phase.”

Spain recently surpassed Italy by total number of COVID-19 cases, registering over 124,700 infections as of Saturday, along with 11,744 fatalities. As elsewhere, the infection rates are highest among the elderly and immunocompromised. Global new coronavirus cases shot up to over 1.1 million on Saturday, with the virus putting a severe strain on many countries’ health care systems, and virtually shutting down economic activity.