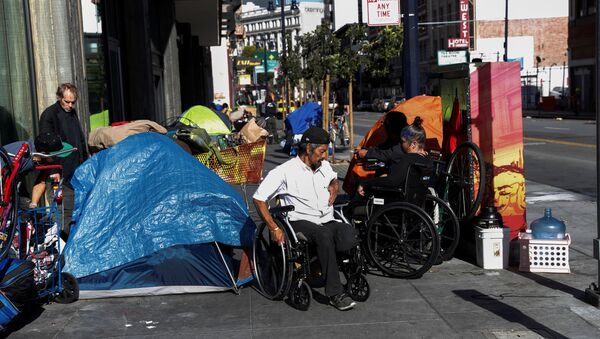 © REUTERS / SHANNON STAPLETON
Subscribe
You’ve probably heard the coronavirus guidelines: elderly people and those with underlying health conditions are more vulnerable to the disease than others. But there’s one often neglected category that has become an even more pressing concern.

The COVID-19 pandemic has aggravated California’s long-standing problem: thousands of homeless people, who have now found themselves at a critical risk of contracting the virus.

“It is truly unfortunate, California, and especially large cities like San Francisco and Los Angeles, have not considered homelessness a priority for the past 20 years, as stated by California Governor Gavin Newsom,” says Alexandra Datig, a political commentator and publisher of Front Page Index.

“Housing the homeless population immediately will save many lives as conditions on the streets are unsanitary and unsafe. The filthy conditions the homeless live in have been a threat to all of the public health prior to COVID-19.”

California, with its generous welfare regime and pleasant climate, has long been a poster state for the US homelessness problem, with one of the highest rates in the country and more than 151,000 people leaving on the streets statewide. San Francisco is the worst-affected city in California; its homeless population rose by 30 percent in the past three years to appoximately 10,000. 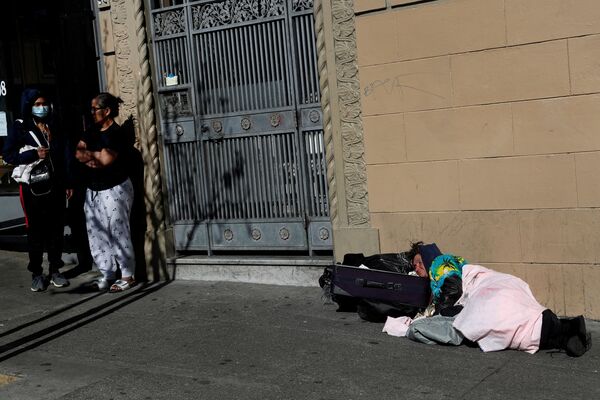 A homeless woman sleeps on a sidewalk amid an outbreak of the coronavirus disease (COVID-19), as two women stand in San Francisco, California, U.S. April 1, 2020
© REUTERS / SHANNON STAPLETON

There has been a public debate around the crisis going on for years, but the city remains divided on how to battle it. One of the biggest measures proposed as of late, a tax on big businesses for homeless funds, has got tied up in courts.

San Francisco, as well as the rest of the state, is under a stay-at-home order, and residents have been told not to gather in groups bigger than 10 and maintain a safe distance from others when outside.

For homeless people, that stay-at-home order doesn’t translate into anything other than stay-where-you-were-sleeping-last-night. The Centres for Drug Control and Prevention advise against breaking up homeless encampments during the outbreak, and there is no clear statewide strategy to contain the spread of the virus in that community. Governor Newsom has recently authorised $150 million in funding for Californian cities to shelter homeless people as a temporary quarantine measure.

“There is not even a solid, agreed upon approach towards how to care for the homeless. The very significant majority of homeless population are mentally ill and drug addicts. Many currently live on the streets, in tents or other makeshift structures or cardboard boxes,” says Richie Greenberg, a former Republican candidate for San Francisco mayor.

“These are the most vulnerable to any and all diseases, so this group is the priority. Some city hall leaders and homelessness agency advocates want them immediately brought inside, to homeless shelters. But then these same leaders realise relocating everyone together in very close proximity without proper distance between them will lead to spread of the coronavirus.”

The lack of safe space in overcrowded shelters has left city authorities with an unorthodox option: lease rooms at now-empty hotels and relocate some unhoused people there.

Officials said they expect to secure 2,500 rooms for the homeless as well as for health workers who don’t want to risk infecting their family members. Thousands more rooms could become available in the coming weeks as negotiations with hotels continue. 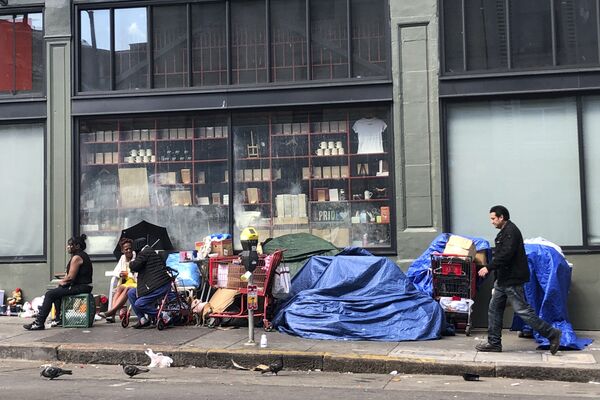 People chat on a sidewalk in the Tenderloin neighborhood of San Francisco on Friday, March 20, 2020. As California authorities said they were working to limit the spread of the coronavirus in the homeless population, homeless people congregated as usual in parks and on sidewalks, disregarding orders to stay 6 feet apart and practice social distancing.
© REUTERS / Juliet Williams

That vision has several blind spots, Greenberg says: “Since the significant percentage [of homeless people] are mentally ill or drug addicts (or both), there is a safety issue. Stories of addicts placed in a hotel room, only to become violent, abusive, searching for their next drug fix by leaving the hotel room, damaging the hotel property, are more and more common.”

“Who will pay for damage to the hotel, once this emergency is over? What is done when there is a security risk, fights, weapons, brought into the hotel?  What will happen once life returns to normal and the homeless individuals will have to leave, will they leave peacefully or be forcibly ‘evicted’?”

Another problem, as SF mayor London Breed herself put it, is that the government doesn’t have the authority to move anyone into a hotel against their will.

“This is a major flaw in the city's plan,” Greenberg continues. “Civil liberty organisations and community advocates demand the government keep their hands off.”

“Life in San Francisco has come nearly to a halt, normalcy has been very disrupted, with the vast majority of residents staying home – except for emergency workers, hospital workers and other vital services. The only group we see still out and about are the drug addicts and drug dealers, in an nearly business-as-usual open drug market atmosphere, and city government nor the police are doing anything to stop this.”

However unpredictable the hotel relocation scheme might be, the city will likely go ahead with it, given that the first homeless person was reported to have contracted coronavirus at a homeless shelter on Thursday, and the need is growing for the homeless people to be quarantined to contain the outbreak.

“We absolutely need to move unhoused people and people in congregate shelters immediately into private room settings,” says Jennifer Friedenbach, executive director of the non-profit Coalition on Homelessness. “We cannot flatten the curve of the spread, if we have thousands of people who cannot participate in the measures put in place to do so.”

Karen Snedker, professor of sociology at Seattle Pacific University, points out the effort to provide hotel rooms to homeless people through will actually benefit hotels that would otherwise stay empty and face the risk of complete closure.

However, she continues there also are some reasons for concern: “There might be a disconnect with hotel staff and their new clientele. The underlying social distance between groups may add to social stigma and mistreatment of people who are homelessness by the public.”

“The biggest concern is housing people who are homeless in a hotel without access to social services and assistance to get into transitional or permanent housing once the crisis is over. This is the key question. This does not have to happen immediate but it does need to ne apart o the policy planning.”

000000
Popular comments
About time the f**king septic retard yanks understood the word ANARCHY!!! Since WWII only THEY have known how to give it to every other poor bastard. May this be there TOTAL collapse!!!

Capt'nSkippy !!!
3 April 2020, 15:59 GMT6
000000
In Spain, maybe your country too, all who die outside hospital are now automatically certified victims of NOVID-19. Here is the perfect murder opportunity, poison one’s enemy. There’ll be no medical examination. The death will be recorded as caused by the Coronavirus; the corpse goes off in a dustcart. Hey-ho