‘Doing It Too Late’: Standard Chartered CEO Blasts US, UK Handling of Coronavirus 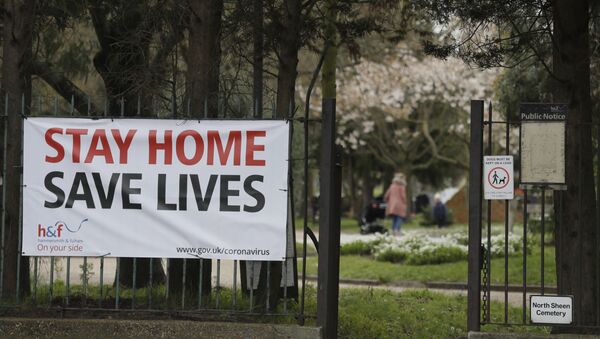 © AP Photo / Kirsty Wigglesworth
Subscribe
The US and the UK have both failed to adopt the swift-response strategies that proved successful in several Asian countries and territories with close links to China. The US now accounts for roughly one in four of all cases confirmed globally.

Bill Winters, the chief executive of Standard Chartered PLC, has criticised the American and British governments for what he called a sloppy response to the coronavirus pandemic.

“I think the Asian health authorities, certainly in China, Hong Kong and Singapore, have demonstrated what early and hard intervention can do in terms of slowing the spread of this disease,” he added.

Over the course of March, the epicentre of the coronavirus pandemic has moved from Asia to the Western countries. China, where the virus was first registered in Hubei province, has reported a continuous drop in its daily tally of new coronavirus cases and begun easing the draconian restrictions it put on the region.

Despite their close links to China, Taiwan, Hong Kong and Singapore appear to have brought their outbreaks under control, probably thanks to swift action on the virus: lockdowns, temperature checks of foreign arrivals, social distancing, intensive testing and tracing the contacts of people known to be infected.

They have all imposed travel restrictions on passengers coming from the mainland by the beginning of February, back when the World Health Organisation (WHO) was still saying that travel bans were not necessary.

“So January and February was really the time to ramp up, and that’s when Singapore was particularly active in getting itself ready ... any country really had January and February to get themselves prepared,” Dale Fisher, an infectious disease expert and chair of the WHO Global Outbreak Alert and Response Network, told CNBC on Monday.

“And countries that didn’t take advantage of that lead time are now the ones that have got a problem.”

The COVID-19 situation now looks far worse in Europe and the United States than in Asia. Critics have mainly blamed their high infection rates and death tolls on insufficient testing and going too slowly into social distancing and quarantine.

The UK initially took a risky strategy to develop widespread immunity in the population, but abandoned it after simulations by the influential Imperial College London showed that this approach would overwhelm hospitals badly and potentially result in up to 250,000 deaths.

The same study projected 2.2 million deaths in the United States if no action was taken, and it reportedly convinced Donald Trump to take the virus seriously after weeks of downplaying the severity of the crisis.

The number of people known to be infected with the new coronavirus in the United States has surpassed 216,000 – almost a quarter of all cases reported globally. The UK has registered almost 30,000 cases. There have been more than 5,100 coronavirus-related deaths confirmed in the US and over 2,300 in the UK, according to a database kept by John Hopkins University.

000000
Popular comments
Both nations have spent decades cutting back social spending, especially healthcare. Each country has tried to entice retired medical professionals back to work. Profits over people. Big pharma has armies of lobbyists & marketers. The "sicker" side of capitalism.