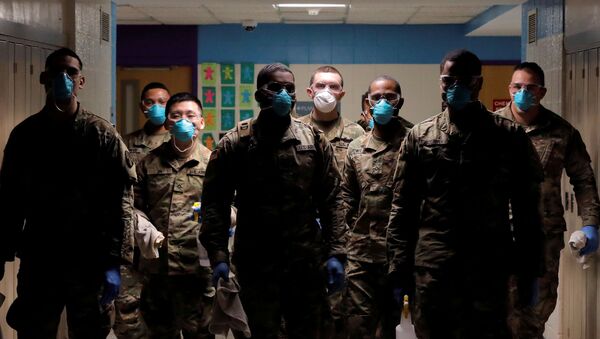 Last September, the US Naval War College hosted a war games scenario aimed at addressing a global pandemic. The scenario - and some of its findings - bear an eerie resemblance to the COVID-19 pandemic and the challenges faced in fighting it.

In September 2019, the US Naval War College (NWC) in Newport, Rhode Island, assembled a team of 50 experts to think out ways to address a global pandemic on an international level. The two-day war game scenario was called “Urban Outbreak 2019,” and many of its premises and conclusions are startlingly similar to the crisis and responses seen as a result of the COVID-19 novel coronavirus pandemic.

In Urban Outbreak, the team of experts faced a deadly infectious disease that attacked the victim’s respiratory system and spread rapidly across a metropolitan area, Military.com explained. Their attempts to quarantine infected groups, coordinate international aid and find a place for the vast logistical apparatus of the US military all struggled to contain the disease.

The experts on the panel hailed from the NWC’s Humanitarian Response Program as well as the Uniformed Services University of the Health Sciences (USUHS), the National Center for Disaster Medicine and Public Health (NCDMPH) and Johns Hopkins University’s Applied Physics Lab. Their conclusions drawn from the exercise were published on Wednesday.

The group arrived at 16 conclusions and provided expanded explanations for them in the report. Many of them mirror those already discovered in practice by addressing the COVID-19 pandemic, while others could find use among experts strategizing about how to contain the virus that has already infected more than 1 million people in 171 countries, killing at least 50,000 of them.

For example, in thinking out how people would react to various government initiatives, the experts noted that “forced mass quarantine or other top down approaches to an outbreak that securitize the response with law enforcement and/or military enforcement may not be successful and could increase the spread of the disease.”

“Early actions and planning across all sectors are exponentially more important than reactive measures once the disease is widespread,” the experts also found.

“Responders may be overconfident if they are not directly connected to the field. Frontline health care workers and first responders are often a good source of realistic assessments,” they also noted.

The experts also warned of the danger of misinformation spreading, the dangers of citizens hoarding goods and the possibility that gangs, religious groups and other non-governmental authorities could rise to social prominence in some communities amid the crisis.

Incorporating the present crisis into their report, the experts noted that it’s better to focus on the death toll as the primary indicator of the scale of the outbreak, since confirmed case counts will always lag and be incomplete.

“Without real time and widespread testing of infections, mortality offers tangible and reliable data,” they found. “Mortality ‘doubling time’ is the most important and widely accessible metric for winning the race against COVID-19 in the absence of extensive testing.”

Resistance to Thinking Outside the Box

Benjamin Davies, the game's designer and the associate director of research for NWC's civilian-military humanitarian response program, told Military.com on Wednesday that a major problem faced by the planners was that they kept focusing on how past outbreaks, such as those involving Ebola, have been fought, rather than on what the present situation required.

For example, since the US military didn’t provide direct aid to infected populations in the 2014 and 2016 outbreaks of Ebola in West Africa, the experts “were really stuck” on the military not doing so in their scenario, either.

This opposition to thinking outside of past boxes actually impaired the war game itself in ways that might have hurt the response to the present crisis.

Instead, the game focused on a "known and curable bacterial pathogen."

Some echo of these observed tendencies among leadership might be found in the present crisis involving the aircraft carrier USS Theodore Roosevelt. The warship has dozens of detected cases of the novel coronavirus, but when the ship’s captain raised alarm with Navy brass about his inability to follow established quarantine standards for his crew of more than 4,000 sailors, he was reprimanded for it. His alarmist letter was leaked to the San Francisco Chronicle last week, and he was sacked by the Navy on Thursday.

Acting Navy Secretary Thomas Modly told reporters Thursday that Captain Brett Crozier, the Roosevelt’s commanding officer, "demonstrated extremely poor judgment" amid the outbreak, noting that sending the letter to as many people as he did was "completely unnecessary to do."