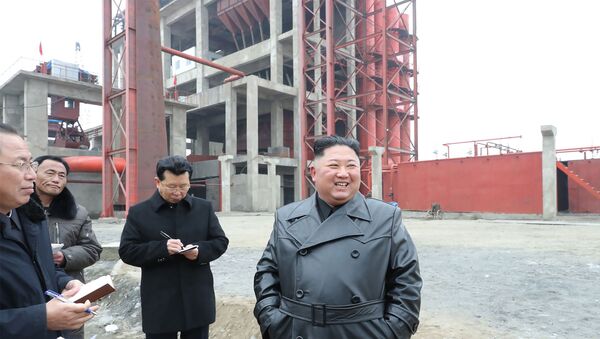 © AFP 2021 / KCNA VIA KNS
Subscribe
Despite US President Donald Trump’s attempt at assisting the Democratic People’s Republic of Korea (DPRK) with fighting the COVID-19 novel coronavirus, experts believe that it is unlikely the North Korean government will accept that offer or even admit that the global pandemic is affecting the country.

It was reported last week by Kim Yo Jong, North Korean leader Kim Jong Un’s younger sister and director of the Propaganda and Agitation Department, that Trump had reached out to his DPRK counterpart via a personal letter which called for cooperation against combating the novel coronavirus.

Speaking to the Korea Times, Terence Roehrig, professor of national security affairs at the US Naval War College, expressed that he doubts at this point that North Korea will be willing to accept outside assistance or report any confirmed COVID-19 cases.

"Though North Korean statements have recognized the severe threat COVID-19 is for the country, it does not acknowledge any cases, though that seems very unlikely,” he argued.

“The spread would have to get much worse, and North Korea would be more likely to accept assistance through an international organization rather than the United States directly."

Van Jackson, a Victoria University of Wellington professor and former Pentagon official, told the outlet that North Korea would likely not seek assistance until it “is in dire circumstances.”

“But it's not clear at this point if North Korea has experienced the pandemic the way most nations have," the ex-Pentagon official said.

"And Kim is on an openly hostile footing toward the US in a bid to get sanctions relief. If sanctions relief were forthcoming in tandem with medical assistance, then I'm sure Kim would take the offer seriously. But otherwise, I have doubts."

While North Korea has been quiet in regard to COVID-19 cases, the country has caused quite the commotion following its missile launch last week.

"The test launch has clearly demonstrated the features of guided missiles, including the differently defined trajectories and incidence angles, the accuracy of hitting the target and the warhead's power,” state-run DPRK outlet Korean Central News Agency (KCNA) reported.

The missile test drew condemnations and admonishments from countries such as Japan and Germany, the latter of which argued that North Korea had violated its obligations laid out by the United Nations Security Council.

"The Federal Government vehemently condemns today’s test by North Korea of two short-range ballistic missiles,” the German Foreign Office said on Saturday. “After two tests of many missiles this month and a total of 15 tests since May 2019, the DPRK again violated its obligations arising from ... UN Security Council resolutions.”

000000
Popular comments
For sure. US want to swallow North Korea