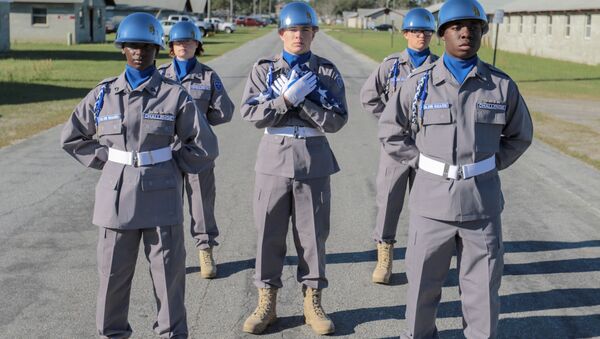 The Atlanta Journal-Constitution (AJC) revealed earlier this week that several at-risk youth and other adolescents attending the FSYCA in Fort Stewart, Georgia, have been subjected to abusive and traumatizing conditions created by employees of the facility - which caters to those aged between 16 and 18 years old.

The FSYCA, which is run by the Georgia National Guard, has had both public documents and former staffers describe a range of misconduct that is alleged to have happened behind closed doors.

“We were kids treated like animals,” 18-year-old former cadet Tabitha Olsen told the outlet via text message. “I understand how they liked to call themselves a military school and that it was supposed to be challenging, but I went through basic training for the Navy and it was nothing like the treatment that school put me under.”
One of the main issues highlighted by the AJC in the investigative report dealt with the use of chokeholds by cadres, or academy military staff.

“A chokehold, if the airway is constricted, could kill you,” said Jim Dooley, a professor at John Jay College of Criminal Justice who teaches lessons on the use of deadly force at the New York City Transit Authority. “I’m thinking an adult male, versus a juvenile, putting probably powerful arms around the neck, and that could constrict the airway. It’s really that simple.”

One particular case regarding of force involved 1st Lt. Daniel Gamble, who is alleged to have put a 16-year-old, who had been arguing and refused to sit in a chair, “in a chokehold and proceeded to choke him out to the point where he passed out,” according to Kayla Rose, a paraprofessional who observed the employee’s conduct.

Gamble was later defended by Beatice Palmer, a long-time cadre who is now the director of the FSYCA.

“1LT Gamble stated that the techniques he used is what he has used repeatedly to restrain cadets in the past when needed,” she wrote in an investigation statement on the matter. “1LT Gamble used other supported techniques to control this situation and maintain control of an irate, uncontrollable, hostile cadet, who was determined to do harm to another cadet if not restrained.”

She went even further to assert that Gamble’s actions and “techniques used to restrain cadets” should be approved as permissible following a review.

However, when the question of abuse was brought up to FSYCA Commandant Joseph Mayfield in a January phone conversation with the AJC, he asserted that he had yet to have a cadre injure any kids since he became commandant.

One former counselor at FSYCA, who chose to remain unnamed due to past alleged sexual harassment from a cadre, explained that the children at the academy predominantely come from broken homes and do not respond well to adult figures yelling and cursing toward them.

“If all they know is to be aggressive, [then] that’s all they know. They don’t know any different. And those kinds of behaviors don’t go away just because you enter a campus of the [Youth Challenge Program],” she said. “The cadre took it more as a threat, so they would try to make the cadets feel small, smaller than they already did.”

The ex-counselor detailed that as punishment for not responding to orders, cadets would be forced to eat last, or sometimes not even eat at all during a meal. Those who got into physical altercations would be made to wear reflective vests to shame them among their peers. If the cadet happened to be a repeat offender, they would have their mattress removed from their sleeping quarters.

“That’s the punishment. Make them sleep on the floor, like they are animals,” she said. “Inmates get treated better than these children.”

In addition to the physical abuse that has been alleged to occur at the academy, the mental health of the cadets was raised as a major concern in the AJC’s investigation.

The report revealed that in October 2018, a 16-year-old cadet, who had previously cut himself, was “revived” by Mayfield after he was found with a rope tightened around his neck. Months prior to that incident, an adolescent was found “in a daze” by a cadre after the cadet had taken “several pills he brought back from his cadet pass,” according to the outlet, citing the incident report. The student in question was later admitted to a psychiatric hospital.

Maj. Gen. Thomas Carden, the adjutant general over the Georgia Department of Defense, told AJC that while students are screened to evaluate their mental wellness and “to set them up for success” at the academy, there are instances in which the school has “high school-aged adolescents, that do things that you’d probably see in just about every high school in this state.”

Something you probably won’t see in every high school in the state is a so-called “padded” room that is nearly empty, with nothing but a narrow window and a sole plastic chair.

“Again, this is not a prison. This is not a Regional Youth Detention Center. This is not an isolation-type area for those purposes,” Carden argued, stating that it was an area for cadets to “decompress.”

“This is a cool-down area for a young man or woman.”

000000
Popular comments
Quite literally, a program for adult trainers to abuse youths so as to satisfy the instructor’s desire for sadism. That is not training. Nothing is accomplished with such brutality. But I am sure these kids won’t join the military later on for fear of more such abuse.
Regula
25 March 2020, 06:43 GMT5
000000
Newsfeed
0
New firstOld first
loader
LIVE
Заголовок открываемого материала
Access to the chat has been blocked for violating the rules . You will be able to participate again through:∞. If you do not agree with the blocking, please use the feedback form
The discussion is closed. You can participate in the discussion within 24 hours after the publication of the article.
To participate in the discussion
log in or register
loader
Chats
Заголовок открываемого материала
Worldwide
InternationalEnglishEnglishMundoEspañolSpanish
Europe
DeutschlandDeutschGermanFranceFrançaisFrenchΕλλάδαΕλληνικάGreekItaliaItalianoItalianČeská republikaČeštinaCzechPolskaPolskiPolishСрбиjаСрпскиSerbianLatvijaLatviešuLatvianLietuvaLietuviųLithuanianMoldovaMoldoveneascăMoldavianБеларусьБеларускiBelarusian
Transcaucasia
ԱրմենիաՀայերենArmenianАҧсныАҧсышәалаAbkhazХуссар ИрыстонИронауОssetianსაქართველოქართულიGeorgianAzərbaycanАzərbaycancaAzerbaijani
Middle East
Sputnik عربيArabicArabicTürkiyeTürkçeTurkishSputnik ایرانPersianPersianSputnik افغانستانDariDari
Central Asia
ҚазақстанҚазақ тіліKazakhКыргызстанКыргызчаKyrgyzOʻzbekistonЎзбекчаUzbekТоҷикистонТоҷикӣTajik
East & Southeast Asia
Việt NamTiếng ViệtVietnamese日本日本語Japanese中国中文Chinese
South America
BrasilPortuguêsPortuguese
NewsfeedBreaking
18:16 GMTWatch Massive Migrant Caravan Push North Into Mexico as US Reports Record Apprehensions
18:13 GMTWatch Iranian Governor Getting Slapped on Stage During His Inauguration
18:10 GMTAssange's Extradition Incomprehensible After Revelations CIA Plotted to Kill Him, Fiancée Says
17:42 GMTUnderwater Treasure May Point to Location of Long-Gone 'Island of Gold' Empire
17:01 GMTRansomware Gang Sells Italian Celebrities' Data Stolen in SIAE Breach for $500,000 – Report
16:36 GMTUS Media Dubs Russia’s Okhotnik Drone ‘Beast’ That Could Pose ‘Big Problem for NATO’
16:14 GMTRussia Urges UN Mission to Ensure Security of Staff in Russian Office in Pristina
16:06 GMTGreek Police Say 7 Officers Injured in Chasing Car Thieves in Athens, One Offender Dead
15:47 GMTRussia-Turkey Friendship Park Opens in Antalya - Video
15:06 GMTTuskless Elephants Evolve in Mozambique Amid Ivory Poaching, Scientists Say
15:03 GMTCCTV Footage Shows Moment Russian Explosives Plant Turned Into Deadly Blazing Inferno
14:54 GMTStunning Discovery of 193 Million-Year-Old Dinosaur Eggs Sheds New Light on Reptiles’ Early Species
14:52 GMTErdogan: Ambassadors of 10 Countries Calling for Human Rights Activist's Release to Be Expelled
14:26 GMTAntifa Protest in Support of Left-Wing Politics Takes Place in Stuttgart
14:18 GMTGazprom Ready to Prolong Gas Supplies to Moldova if Kishinev Pays Gas Debts
14:06 GMTRussian MoD: Berlin Must Know How Amassing Troops Near Russia's Border Ended for Europe in Past
13:59 GMTTokyo Says Self-Defenсe Forces Fighters Scrambled Over Chinese Chopper Takeoff Near Danjo
13:54 GMT24-year-old Who Prepared Fatal Prop Gun for Baldwin Was Worried She ‘Wasn’t Ready’ for Armourer Job
13:15 GMT‘Wicked Sense of Humour’: Turkey Pinches Reporter’s Buttocks, Other Birds ‘Giggle’ - Video
13:02 GMTRally in Support of Assange Takes Place in London