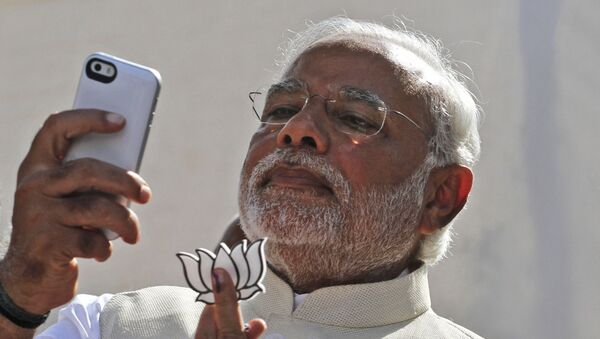 © AP Photo / Ajit Solanki
Subscribe
New Delhi (Sputnik): India’s federal government has asked telecom operators in certain regions, mostly from states ruled by opposition parties, to provide call data records (CDRs) of all users. The government said that the data was required to “test the quality of calls in those regions.”

After reports emerged that the Indian government has requested telecom operators to provide Call Data Records (CDR) of customers, opposition figures have accused the authorities of having an ulterior motive and cited privacy concerns.

CDR's have been requested for  Punjab, Madhya Pradesh, Jammu and Kashmir, Delhi, Haryana, Himachal Pradesh, and Andhra Pradesh, The government, however, clarified that the data was required to “test the quality of calls in those regions.”

Mahesh Uppal, an expert on telecom policy, regulation and strategy in India, believes that such classified information from telecom operators is not required to test network qualities.

“Anybody who thinks that CDRs are required for monitoring the quality of calls is mistaken. I do not think you require such personal data of customers. Besides it’s not really the government that monitors call qualities, it is actually the Telecom Regulatory Authority of India (TRAI) – which is a statutory body which is responsible for maintaining proper telecom networks,” Uppal, who has formerly been associated with the TRAI told Sputnik.

After media reports on CDRs, the federal Telecom Department came out with a clarification on Wednesday that they have developed in-house a software tool to analyse big data and accurately ascertain call drops in any area. For this purpose, data on calls made from mobiles in any tower coverage area is to be analyzed to ascertain calls terminated within 30 seconds of the call and made again as norma a few seconds later, as is the case for a typical call drop.

An apex body of mobile service providers – Cellular Association of India (COAI), later accepted the Telecom Department’s demand and said its members would “source the information.”

“Being satisfied, we have cooperated with the DoT to source the information sought by the DoT to improve network quality and address call drops. It is reiterated that the data is anonymised and does not contain the names of either the maker or receiver of the calls. Hence there is no threat of infringement of privacy of any person,” said Rajan S. Mathews, Director General, COAI.

Uppal, however, stood firm on his statement and said, “Intrusion in the personal data of so many people of any kind is a matter of concern.”

The opposition Congress party had also slammed the government for “mass surveillance” and termed it “scandalous."

“Assault on Right to Privacy held to be a Fundamental Right,” said Manish Tiwari, a Congress member of Lok Sabha, the lower house of Parliament.