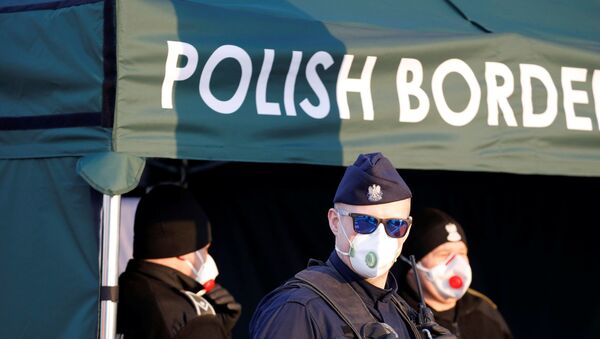 Europe has become the epicentre of the COVID-19 pandemic after China overcame the peak of the outbreak. This prompted the continent to close its borders to battle the virus, with Germany being the latest to do so.

Joachim Paul, Member of Parliament (Rhineland-Palatinate) and a political analyst believes that Germany was too reluctant for too long to close the borders.

Sputnik: Europe chose to close national borders between all countries instead of offering mutual assistance. Why is that?

Joachim Paul: It is simply the duty of a state to protect health and safety of its own citizens and the foreigners living on State Territory. The German government was in my opinion for a long time too reluctant. Germany closed borders when 6000 Infections already happened. We lost precious time. We have to state that the closing is not very strict. Some international flights were still arriving in Frankfurt Airport and the small Hahn Airport in my country yesterday. The mechanisms at EU level are too complicated and bureaucratic to have an immediate impact. Quick solutions can only be found at the level of sovereign states. Cooperation between the European States should be resumed as soon as possible once the risk of infection has decreased and citizens have been taken care of.

Sputnik: A united Europe is closing its borders to stop and regulate the flow of migrants, now in order to prevent the spread of coronavirus. Do you think this crisis can change the perception of the "open borders" principle and how?

Joachim Paul: The AfD has been calling for stricter border controls since 2015. Five years ago a large number of migrants crossed our borders uncontrolled. Chancellor Merkel claimed that it would not be possible to close or control the German borders anyway. The Public is witnessing now that this was merely a political legend. Many people perceive the closure of the border now as a positive act of a state taking justified measures. Merkels Principle of Open borders is Challenged for the First time. This will have consequences for the political landscape in Germany.

Sputnik: When the pandemic is over, will those who have advocated for the European Union revise their opinions?

Joachim Paul: The crisis we are facing right now is not a European but rather a global crisis. But people will realize that the key to solving crisis like this lies in the sovereignty of states. Only a sovereign state can act quickly and react appropriately. This means that certain competencies must remain in the hands of the nation-states and must not be transferred to the EU. This must also be recognised by EU enthusiasts. They must realise that there cannot and will not be a common solution for every problem and every crisis among all EU states.

Sputnik: When the crisis is over, should we expect a new wave of euroscepticism among Europeans?

Joachim Paul: Such a crisis is also always a litmus test for the respective governments. People will watch very closely how successful the individual governments have been dealing with the situation. Some will appreciate the quick national solutions. In the future, some will also ask for such a national solution to other problems for example in the migration crisis. This could damage the EU's image in the long term and lead to more Euroscepticism.

Sputnik: If so, should we expect any changes in the government of European countries?

Joachim Paul: This is possible. Particularly in states with strong eurosceptic parties - in Germany and France for Example.