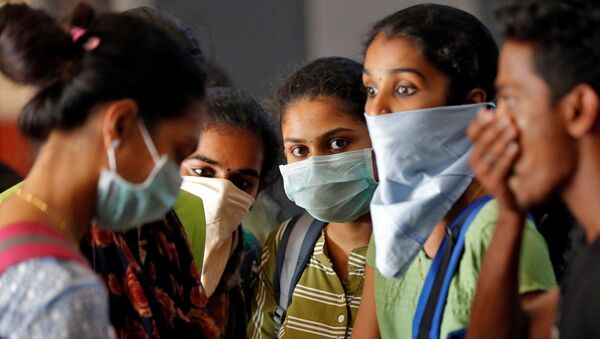 Pratibha Sharma
Sputnik correspondent
All materialsWrite to the author
New Delhi (Sputnik): With the Indian government’s unprecedented move to suspend all visas and introduce a travel ban, the country appears to have literally quarantined itself. There are over 75 confirmed cases of coronavirus in India, which also witnessed the first death caused by the infection on 12 March.

With a spike in coronavirus disease 2019 (COVID-19) cases in India, face masks have run out of stock in the Indian market and prices for hand sanitisers have skyrocketed.

Health experts point out that panic and scare is too great in the country, even though the situation is not that appalling.

“Regular flu patients are turning up to be checked for COVID-19. They are rushing to the facility saying I want COVID-19 to be treated. We have to convince them that they are not suffering from coronavirus but regular seasonal flu", said Rakesh Chawla, senior consultant, respiratory medicine, Saroj Super Speciality Hospital, Delhi.

Lauding the “pro-activeness” of the government in containing the virus, Chawla said it’s a good sign that the primary carriers of this virus were not based in India, but have travelled from abroad carrying this infection.

“Precautions are being taken due to the panic and scare but disease incidences are not as much as it is being propagated”, he said.

Fresh cases of infection in India started with patients who had a travel history to epidemic-hit countries.

Health Minister Harsh Vardhan has pointed out that one of the persons who tested positive - a resident of Noida city in Uttar Pradesh state - had a travel history to Dubai and infected six of his relatives in Agra city.

Similarly, a majority of the cases initially comprised individuals from a group of Italian nationals who were on a tour in India.

Meanwhile, health experts believe that although panic is making more people aware and wiser, it is also leading to problems.

Shortage of Masks for Doctors

With hand sanitisers and masks vanishing from the local markets, people who need it the most are facing shortages, therefore Maharashtra state has imposed a ban on the sale of N95 masks without prescriptions.

Dr Yugal Kishore Mishra, chief of clinical services and head of cardiac sciences, Manipal Hospitals, Delhi, said, “Healthy individual who is not coming contact with the patient or carrier, there is no requirement to put on mask. Because of this I and my associates are facing the problem of non-availability of masks”.

The situation has led to black-marketing and hoarding of masks, with the Indian health minister taking to Twitter to talk about the issue and warning against it, saying that strict action will be taken against those who sell these masks illegally.

Not a High Mortality Disease

Dr Mishra said that the infection is not in itself deadly: the fact that it is a new strain which has not been completely understood is what’s causing panic.

“Mortality in this type of virus is 3-4 percent as compared to SARS virus or HIV. There are three categories of coronavirus patients – mild, moderate and severe. If 100 cases appear, 80 percent of the people fall in mild symptoms category”.

The Centre for Disease Control and Prevention, an agency under China's National Health Commission, has pointed out that people who are at a risk of serious illness under the infection are elderly people and those who have serious chronic medical conditions such as heart disease and diabetes.

A lot is being said about India’s hot temperature, which is largely being portrayed as inhospitable for the virus, but Dr Rakesh Chawla said, “We cannot be completely sure that the virus will die down once the temperature will rise in India. During the peak of the summer when temperature crosses 43 degrees, it may help a bit”.

On Thursday, India registered its first death due to the deadly coronavirus infection - a 76-year-old man from Karnataka state who had travelled to Saudi Arabia.

The virus, which broke out in the Chinese city of Wuhan, has infected some 127,000 people worldwide and led to over 4,600 deaths, as per the World Health Organisation (WHO), which has declared it a pandemic.