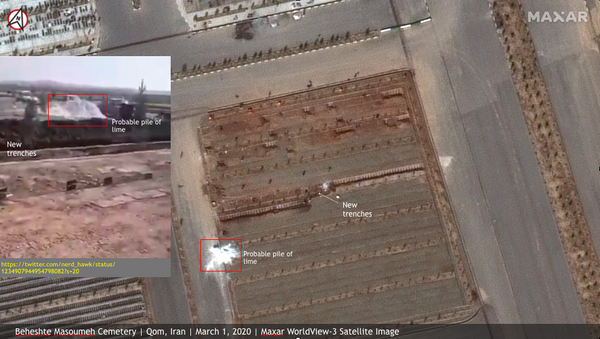 © Maxar Technologies; Vox Media
Subscribe
Satellite images of a cemetery outside Iran’s holy city of Qom appear to show long trenches to be used for mass graves as the number dying from the COVID-19 novel coronavirus continues to rise. Meanwhile, Tehran has urged the US and other countries to send medical aid and lift strangling economic sanctions.

Of all countries with known COVID-19 cases, Iran has more than any except for Italy and China at more than 12,000. In just the last 24 hours, more than 1,000 new cases have been confirmed, and a total of 429 people have died of the disease, which is related to SARS and MERS, since the outbreak began.

One grim method by which Iran is dealing with the crisis seems to be digging large mass graves in the Behesht-e Masoumeh cemetery outside of Qom, one of the holiest cities in Shia Islam and a major center of the COVID-19 outbreak in Iran.

Photos showing what appear to be two mass grave sites in preparation were taken on March 1 by private space technology company Maxar Technologies and first reported by the New York Times on Tuesday. Together, the two trenches provide roughly 100 yards of new burial space. 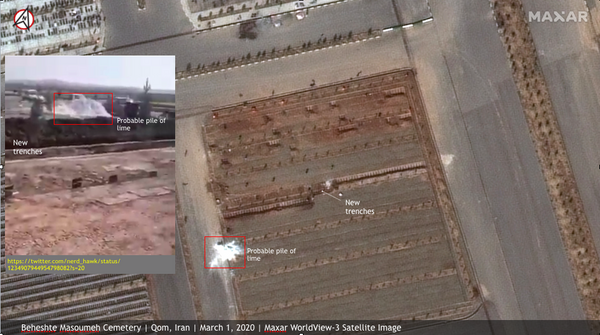 Citing a Maxar analyst, Vox noted a large pile near the new trenches of what is likely calcium oxide, better known as lime, in order to disinfect the bodies as they are buried. The Associated Press previously reported that Behesht-e Masoumeh staff were lining graves with lime if the dead tested positive for the novel coronavirus.

Muslim burial practices call for those who die from plague or other epidemic illnesses to be buried a day and a night after they have died, in order to ensure they are not comatose; cremation is considered a violation of the body’s dignity and typically prohibited under Islamic law. However, other Islamic law prescriptions, including ritual washing of the body prior to burial, are being foregone amid the pandemic’s spread, two medical workers in Qom told CNN last week. 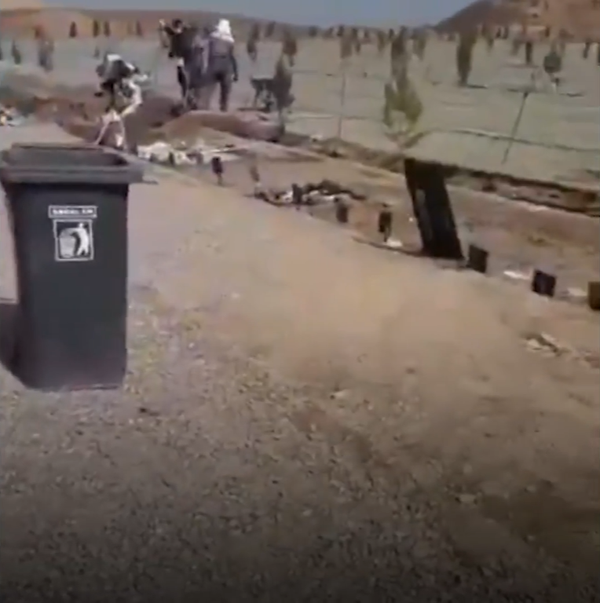 Workers at at the Behesht-e Masoumeh cemetery in Qom, Iran, prepare mass graves for those killed by COVID-19 novel coronavirus
© Sputnik Screenshot

The strangling economic sanctions re-implemented by Washington since 2018 have hindered Tehran’s response to the COVID-19 outbreak. While its leaders have appealed for emergency relief, the US has so far stood intransigently against making exceptions for aid.

That the US sanctions are causing otherwise-avoidable deaths in Iran is not new. As Sputnik reported last month, Iran has seen a spike in cancer deaths as local stocks of treatments run out and purchases abroad become ever harder, and children are dying of the rare skin condition epidermolysis bullosa because the necessary medicine cannot be bought from Europe.

World Health Organization Director-General Tedros Adhanom urged on Friday, “This is everyone's business; no one should be excluded. Especially leaders have a special role to play to tell people to adhere to basic morality. This virus is a common enemy."

​Iranian Foreign Minister Mohammad Javad Zarif tweeted on Thursday a list of the country’s medical needs, including the life-saving respiratory-assistance devices necessary to help those with the most serious cases of the coronavirus, which targets the respiratory system. He also wrote a letter to UN Secretary General Antonio Guterres explaining that US sanctions are “obstacles to the sale of medicine, medical supplies and humanitarian goods.”

​On Wednesday, Ministry of Foreign Affairs spokesperson Abbas Mousavi urged the US to relax sanctions targeting financial transactions, allowing international banks to be able to deal with Iran directly. Tehran has also consulted the International Monetary Fund, seeking an emergency $5 billion loan from the roughly $50 billion set aside by the bank to “guarantee that people are not going to die because of a lack of money,” al-Monitor reported.

However, the day prior, US Secretary of State Mike Pompeo tweeted that Iran must “immediately release on humanitarian grounds all wrongfully detained Americans” before other countries will be permitted to help Iran. Iran has already released more than 70,000 prisoners on furlough in order to prevent jails from becoming hotbeds of COVID-19 infections.

Any nation considering humanitarian assistance to Iran should seek the release of all dual and foreign nationals.

​US President Donald Trump also elected on Thursday to extend sanctions for another year against Iran’s all-important oil industry, by which Tehran obtains most of its revenue.

However, inside the US, some politicians are pressuring the Trump administration to ease sanctions on Iran as well. Rep. Ilhan Omar (D-MN) retweeted a desperate plea by Iranian-American poet Hoda Katebi on Friday, saying, “We need to suspend these sanctions before more lives are lost.”

We need to suspend these sanctions before more lives are lost https://t.co/G9ow3GgsHr

​“I'm terrified. My aunt is a doctor in Iran. [Because] of sanctions there is a MASSIVE shortage of medical supplies, including face masks. She keeps giving her face mask to other docs [because] there aren't enough for everyone. For the love of GOD we need to end sanctions on Iran NOW,” Katebi said.