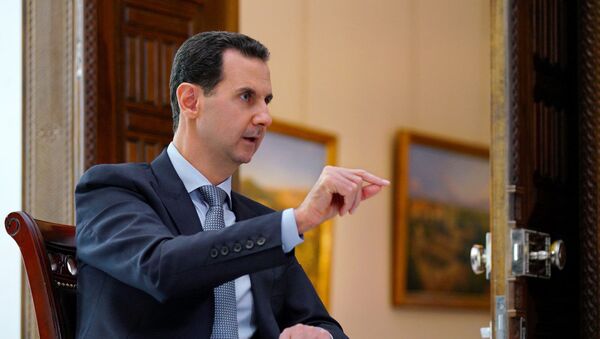 © Photo : Syrian President's press service
/
Go to the photo bank
Subscribe
The Syrian president earlier said that there is no enmity between the peoples of the two countries, and the tensions are linked with political interests.

Syrian President Bashar Assad has said in an interview with Rossiya-24 Russian TV channel that he is not ruling out restoring ties with Turkey if Turkish President Recep Tayyip Erdogan stops "supporting terrorists".

The statement comes after Assad said that Syrians had not committed any hostile acts against Turkish people and that there is no reason for there to be friction between the two neighbouring countries.

Assad also said that he considered Turkey "Syria’s brotherly nation" and did not understand for which goals Turkish citizens "should die" while fighting in Syria.

The interview with the Bashar Assad was aired on Thursday amid escalating tensions in Idlib. Tensions in the Syrian province dramatically worsened after Ankara launched Operation Spring Shield in the region, the offensive, which was targeted at Syrian troops, was initiated by Ankara after some of its forces were caught in the line of fire when the Syrian Army responded to attacks by the Idlib-based terrorist group Hayat Tahrir al-Sham*. According to the Russian Ministry of Defence, the Turkish troops were not supposed to be present at the locations where they came under fire.

In February, Russian Foreign Minister Sergei Lavrov said that Turkey had not fulfilled several key commitments on Idlib, including failing to distinguish between the armed opposition, which is ready for dialogue with the government within the framework of a political process, and terrorists. In turn, Turkish Vice President Fuat Oktay claimed that Ankara had fulfilled its obligations in Idlib.

000000
Popular comments
All Praise to President Assad, President Putin and the Syrian Alliance!

nereas
5 March 2020, 20:57 GMT5
000000
Erdo wants Assad removed. It is a delusion to think you can make a deal with the devil. This is the calm before the storm and Erdo will start once again. He'll accuse Russia and Assad of not keeping their promises so that justifies himself shoveling more tanks into Idlib. During this calm both Russia and Syria must prepare to make war with Erdo.